Further details have emerged after a man killed his co-worker after she refused his love advances. 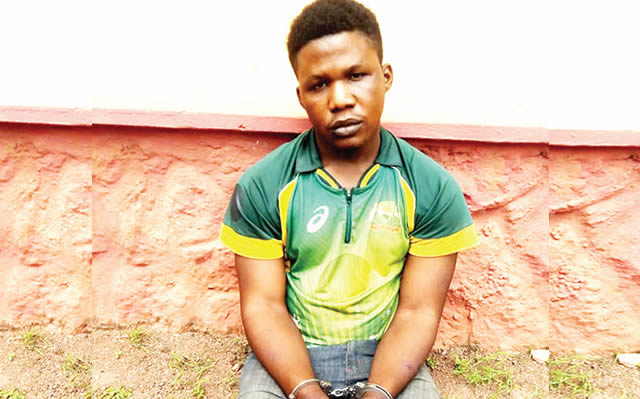 Eniola Adenuga
A 27-year-old man, Eniola Adenuga, has been arrested by men of the Ogun State Police Command for allegedly raping a co-worker, identified as Faith Jude, to death in the Lafenwa area of the Abeokuta South Local Government Area of the state.
According to Punch, more details of the incident was provided by the Commissioner of Police in the state, Bashir Makama, who paraded the suspect alongside 18 others apprehended for various crimes such as rape, armed robbery and cultism, among others, at the command headquarters, Eleweran, Abeokuta, on Wednesday.
The CP, who was represented by the Deputy Commissioner of Police, Operations, Edward Ajogun, said Adenuga, a mobile money agent, was arrested for murder after he went to report the discovery of Faith’s corpse at the Lafenwa Police Station.
He said the suspect committed the crime on September 16 but reported the discovery of his co-worker’s corpse on September 19.
The CP said the suspect told police personnel at the station that he discovered the lifeless body of his co-worker covered with a canopy in front of their shop.
According to Makama, the suspect took advantage of the downpour on the day of the incident by gagging the mouth of the deceased with a piece of cloth to stop her from screaming, while he was raping her.
He explained that Adenuga kept the body of the deceased in his shop for three days after the incident, but was forced to report because of the odour oozing out from where he kept the body.
Makama added that the suspect confessed to the crime after he was grilled by the police.
He said, “On close examination, it was discovered that there were marks of violence on the body of the deceased, which raised the suspicion that she was murdered.
“Based on the discovery, Eniola Adenuga was professionally interrogated and it was discovered that he was the person who actually killed the victim.
“He confessed to the crime and stated that the deceased, a co-mobile money agent, came to the shop to collect money for their boss.
“He took advantage of the downpour and grabbed the deceased and gagged her mouth with a piece of cloth, while he raped her.
“Having had his way with the young woman, he discovered that she had died of suffocation. He has been arrested, while the case is under investigation at the homicide section of the command’s Criminal Investigation Department.”
Adenuga, who claimed to regret his action, begged the government to temper justice with mercy.
He said, “I regret my action, because I did not know what came over me; I am not a womaniser; I don’t know why I got myself involved in this.
“The government should temper justice with mercy; I promise never to do something like this again.”
The CP stated that the command was continuing with the mop up of criminals by raiding their hideouts and operational bases in the state.
Makama added that there had been tactical deployment of men from special units like the Special Anti-Robbery Squad, Anti-Kidnapping Unit, Anti-Cultism Unit and conventional police personnel across the length and breadth of the state.
Top Stories