Security operatives have apprehended prostitutes and hoodlums during a raid at a hotel. 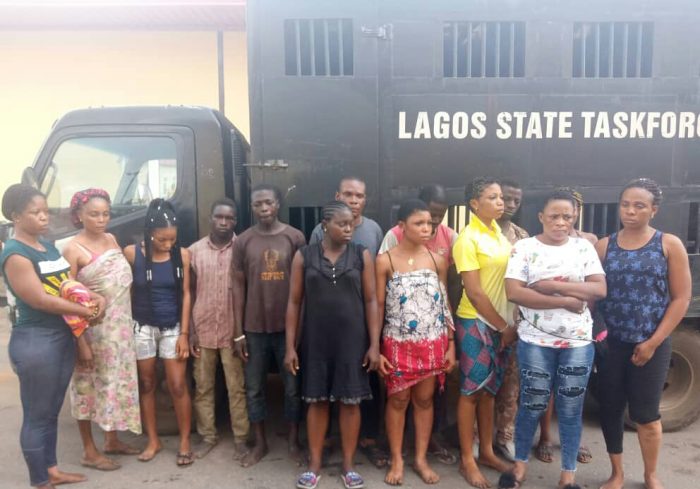 The arrested prostitutes and hoodlums
The operatives of the Lagos State Environmental and Special Offences Enforcement Unit (Task Force) have raided an illegal brothel around Mile 2 area of Lagos, Southwest Nigeria in the early hours of Friday and arrested five notorious miscreants and nine prostitutes with illegal drugs.
Chairman of the Agency, CSP Olayinka Egbeyemi said the raid became imperative following complaints that criminal activities around Mile 2 towards Festac were perpetrated by miscreants who reside in the illegal brothel.
Egbeyemi disclosed that the brothel had previously been demolished by the Agency during the clearing of illegal structures, shanties and containerised shops from Eric Moore Road down to Trade Fair axis.
“It was disheartening seeing that the demolished brothel had been re-built by the owner after it was demolished for illegal construction on road setbacks. The last time we demolished the illegal brothel, those miscreants taking refuge there at night attacked our officers with dangerous weapons”, Egbeyemi disclosed.
He stated further that the brothel is noted for harbouring criminals who rob unsuspecting members of the public of their valuables and also serves as an outlet for the sale of illegal drugs such Indian hemp, Tramadol and other sex enhancement drugs, especially to underaged children.
The Taskforce Chairman maintained that the present administration would not fold its arms and allow miscreants to make life difficult for law-abiding citizens.
He confirmed that the illegal brothel was again demolished this morning by the agency.
While assuring members of the public that the agency and other security agencies would not rest on their oars, Egbeyemi declared that all those arrested would be charged to court in compliance with the directive of the Lagos State Commissioner of Police, Mr. Zubairu Muazu.
Top Stories