A 9-year-old girl who is a double amputee is set to model at the Paris Fashion Week. 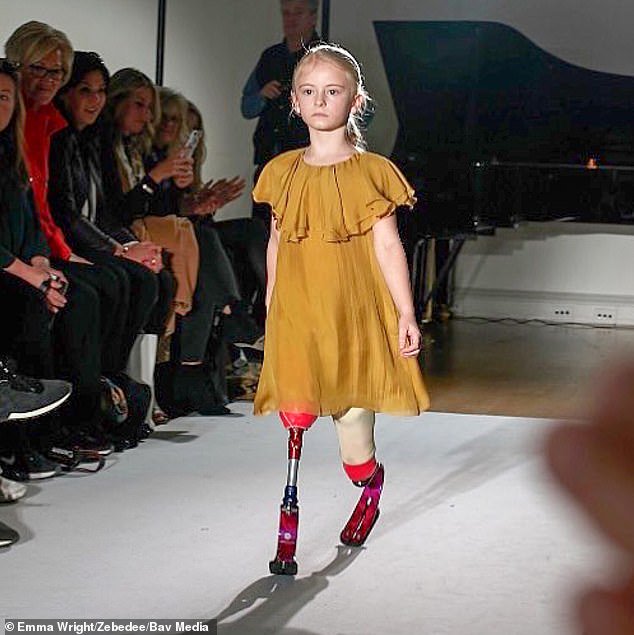 Nine-year-old Daisy-May Demetre, whose legs were amputated due to a birth defect, will become the first double amputee to walk the runway in Paris Fashion Week on Friday, Reuters reports.

Born in Birmingham, Britain, Daisy-May’s lower legs were amputated due to fibular hemimelia – a lack or shortening of the calf bone – when she was 18 months old.

She started modeling for UK clothing brands a year ago and has walked at the London Kids’ Fashion Week in February and at the New York Fashion Week earlier this month.

“Here to make history, that’s what we do,” she said on her Instagram account, which showed a picture of Daisy-May and her father Alex in front of the Eiffel Tower.

Daisy-May uses carbon blades for running and on the catwalk – she even did a cartwheel in them at the London show – but for school she has a different set of prosthetic legs.

She told Reuters Television she loves putting pretty clothes on and posing for the camera.

“I get my hair done, then I get my make-up done and then I put my dress on, and my legs, and I get on the catwalk. Sometimes I do not even feel different,” she said.

Her father Alex Demetre told Reuters he had taken to drinking and gambling after she was born and even had suicidal thoughts worrying about how her handicap was going to affect her life.

After seeing a TV show about fashion, he proposed modeling to her and since then she has worked for several major UK clothing retailers as well as for sports brand Nike Inc.

“When she was born, we thought it was going to be the end of the world. How people were going to look at her and perceive her, like boyfriends, and husbands.

“Now I see that she was a gift. Her disability is an actual gift and she wears that gift with pride. It does not hold her back in any way,” he said.

Lulu et Gigi founder Eni Hegedus-Buiron said she had no second thoughts about hiring an amputee to model her luxury children’s clothing, which can cost as much as $2,600 for a “Princess and the Pea Gown”.

“We bring her among the other girls. We have a curvy teen model. We have models with Down syndrome. Inclusion is for all different children,” she said.
Top Stories