The EFCC has begun a massive crackdown on internet fraudsters all over the co8ntry, arrested many of the suspects.

28 Yahoo Yahoo suspects arrested in Enugu
In what appears to be a massive crackdown on internet fraudsters countrywide, the Economic and Financial Crimes Commission, EFCC has arrested no fewer than 53 suspects in Lagos, Abuja and Enugu. All the arrests were made within the last 24 hours, PM News reports.

Some of the arrests came with a touch of drama, with a lady suspect in Enugu trying to flush down the toilet a broken iPhone. In Lagos, five suspects were caught hiding inside the ceiling of their den. But they were flushed out.

Enugu accounts for the highest number, with 28 picked up in multiple raids.

The cars seized from Enugu suspects
In Abuja, seven suspects were arrested in two operations in Kubwa and Gwarimpa.
Lagos Zonal office arrested 18 suspected internet fraudsters in Lagos, in a mass swoop, including five of them who hid in a ceiling.

They were arrested in the early hours of Friday, September 27, 2019 at different locations in the Alagbado area of Lagos State, following intelligence received by the Commission about their alleged involvement in criminal activities.
During the raid, about five of the suspects attempted to escape arrest by hiding in the ceiling of their apartments but they were fished out and arrested.
Items recovered from the suspects include charms, phones, laptops and five cars-Hyundai Sonata, Toyota Camry 2004 model, Toyota Camry 2007 model, Toyota Camry 1999 model and Honda Pilot. 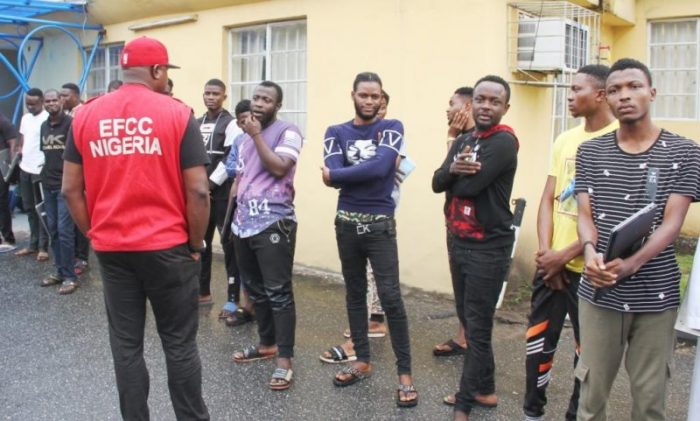 The arrests were made following intelligence obtained by the Commission regarding activities of some of the suspects alleged to have defrauded many unsuspecting victims (within and outside the country) of huge sums of money through their nefarious operations.

In the course of executing search at the residences of the suspects, many of them attempted destroying some phones found on them with a female suspect, caught trying to flush a broken iPhone down the toilet.

The phone was however recovered.

In Abuja, seven suspects were nabbed by the Operatives of the Cybercrime and Advance Fee Fraud sections of the Abuja Zonal Office of the Economic and Financial Crimes Commission have arrested seven ”Yahoo Yahoo boys” in two separate raids. 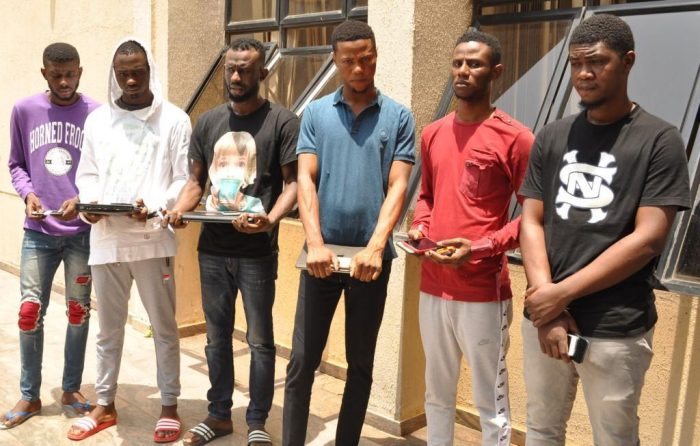 The six cybercrime suspects arrested in Kubwa Abuja
Six of the suspected fraudsters were picked at 5 Arbe Saibra Dantata Estate Kubwa, Abuja, in an operation triggered by intelligence regarding the activities of the suspects.

EFCC spokesman, Wilson Uwujaren said the suspects had been under surveillance for weeks.
The exhibits, including a pump action gun found with Mbaeri Anselm Chukwuma at David Estate,Abuja 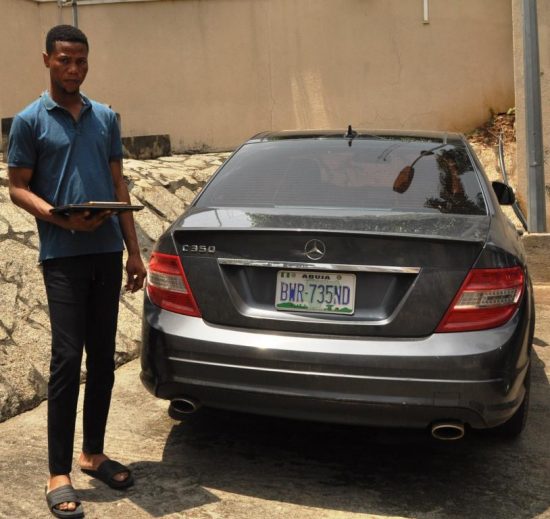 One of the Kubwa cybercrime suspects with a Mercedes 350
Some of the items recovered from the suspects include mobile phones, laptop computers, and a Mercedes C350.

Items recovered from him include a Toyota Rav4, 2 laptops, 2 phones and a Pump Action Rifle with 2 Cartridges.

The suspects would be charged to court as soon as investigations are concluded.

The suspects who have volunteered statements, will be charged to court as soon investigations are concluded, said EFCC spokesman Wilson Uwujaren.
Top Stories