The country is regularly cited as one of the most corrupt in the world with more than half of the population living in poverty. 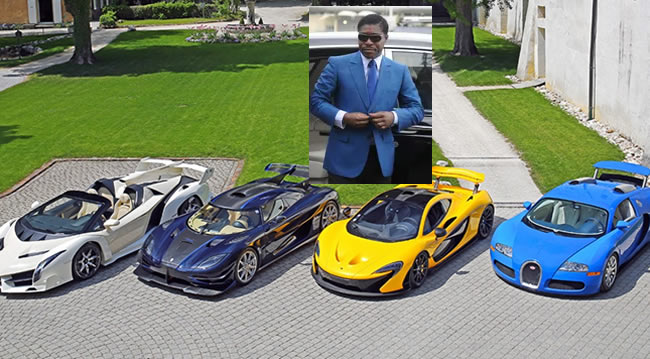 A picture taken on Saturday at the Bonmont Abbey in Cheserex, western Switzerland, showing four of the 25 luxury sport cars seized from Teodorin Obiang Nguema (inset), who is both the son and vice president of Equatorial Guinea's President, Teodoro Obiang Nguema Mbasogo. AFP photo
A new report by AFP has revealed that a collection of luxury cars seized from Equatorial Guinea’s vice president Teodorin Obiang Nguema will be auctioned off in Switzerland on Sunday and are estimated to bring in 18.5 million Swiss francs ($18.7m).
“This is an exceptional sale,” Philip Kantor, of British auctioneers Bonhams, told AFP. “It’s a private collection of super cars, with very low mileage.
Among the cars to go under the hammer at a Geneva golf club are seven Ferraris, three Lamborghinis, five Bentleys, a Maserati and a McLaren.
The most expensive lots are a Lamborghini Veneno Roadster, valued at between €4.8m and €5.7m ($5.2m or $6.2m) and yellow Ferrari hybrid at between €2.4m to €2.6m.
The cars were all confiscated by Swiss justice after the opening in 2016 of a financial wrongdoing case against Obiang, son and likely heir of Equatorial Guinea’s authoritarian President Teodoro Obiang Nguema who has ruled for 40 years.
All will be sold with no reserve price.
In February, Swiss prosecutors said they were dropping charges of financial wrongdoing against Teodorin Obiang Nguema but were confiscating the luxury cars as part of the case.
Under the Swiss penal code, prosecutors can choose to drop charges in this category if defendants offer compensation “and restore a situation that is in conformity with the law.”
Playboy reputation
Equatorial Guinea has also agreed to give Geneva 1.3 million Swiss francs to cover the costs of the case.
Vice president with responsibility for defence and security, Teodorin Obiang has a reputation for a playboy lifestyle.
In October 2017, a Paris court handed him a three-year suspended jail term after convicting Obiang of siphoning off public money to buy assets in France.
He was accused of spending more than 1,000 times his official annual salary on a six-storey mansion in a posh part of the French capital, a fleet of fast cars and artworks, among other assets.
He was also given a suspended fine of 30 million euros.
In September, Brazilian media said that more than $16 million in cash and luxury watches were seized by Brazilian police and customs officers from luggage of a delegation accompanying Obiang on a private visit.
Brazilian daily O Estado de Sao Paulo quoted a diplomatic source from Equatorial Guinea as saying the money was to pay for medical treatment Obiang was to undergo in Sao Paulo.
The watches were for the “personal use” of the president’s son and were engraved with his initials, the report said.
Obiang is reputedly on a fast track to succeed his father.
Last October, he was promoted from colonel directly to division general, without passing through the normal intermediary rank of brigade general.
The following month, he presided over a cabinet meeting for the first time.
The tiny West African nation is one of the continent’s top petroleum producers and has a population of just 1.2 million.
The country is regularly cited by NGOs as one of the most corrupt in the world.
Top Stories