Some hoodlums have struck hard in Lagos state, killing a traditional ruler and causing serious commotion. 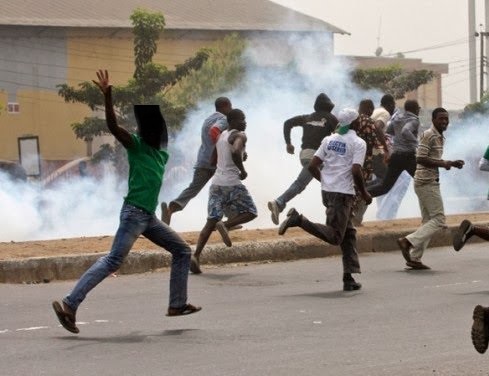 File photo
The Nation reports that a traditional ruler in Abule-Ado, Amuwo-Odofin Local government area of Lagos, Chief Muritala Akogun, has been killed by some hoodlums.

Chief Akogun died on Monday from the injury he suffered from the attacks by the thugs.

It was learnt that the late traditional ruler was attacked on Saturday and suffered deep machete cuts on his head, hands, and face.

Another resident who was severely injured in the fracas is said to still be receiving treatment at a hospital.

The late traditional ruler was recently installed as the Akogun of Ado kingdom.

He was said to have attempted to prevent some hoodlums who invaded the community from wreaking havoc, last Saturday before he was attacked.

The Nation learnt that the hoodlums came to avenge the beating of their colleague by some members of the community.

An eyewitness said a fire razed some shanties in Abule-Ado last Friday. While owners of the affected shanties were trying to salvage their property, some miscreants, hijacked the situation and stole some of the property.

One of them was said to have been caught with a television set, which he was taking to his end.

Some of the residents, who were miffed by his action, reportedly beat him and collected the stolen television set from him.

But the hoodlum escaped and went to mobilise his members who invaded the community.

The late Akogun, who was at a naming at Shibiri, was said to have left the function for Abule-Ado, when informed of the incident.

He was said to have also put a call to one Lawal, said to be influential among the hoodlums.

According to the Otun of Ado, Afeez Olorunkemi, “the incident happened while Chief Akogun was pleading with Akeem Lawal to call his boys to order. He stood in front of Ado youth office when we sighted the hoodlums approaching. Since Lawal, their coordinator had assured us that there was no cause for alarm; we stayed back, unknown to us that they had a sinister motive. They got so close to us and started attacking us.
Read Also; I have sold over 30 children, says suspect

“When they launched their attack, Lawal simply walked straight to his vehicle and drove off without cautioning his boys.

“Another person, Prince Fasiu was attacked inside the toilet where he ran into for safety. Fasiu was hiding under the washing hand basin when one of the hoodlums attacked him and another victim. They were stabbed and macheted on different parts of their bodies.

“Chief Akogun and Prince Fasiu were later rushed to a private hospital. Unfortunately, Chief Akogun died in the early hours of yesterday, (Monday) as a result of the severe injuries he sustained, while doctors are still battling to save Fasiu”.

The Nation learnt some people have been arrested and transferred from Trade Fair Police Division to the State Criminal Investigation and Intelligence Department, (SCIID), Panti, Yaba, Lagos Mainland.
Top Stories