Horror! One Person Dead As Heavy Flooding Sweeps Away Ureje Bridge In Ekiti


One person has reportedly died after heavy flooding swept away a bridge in a community in Ekiti state. 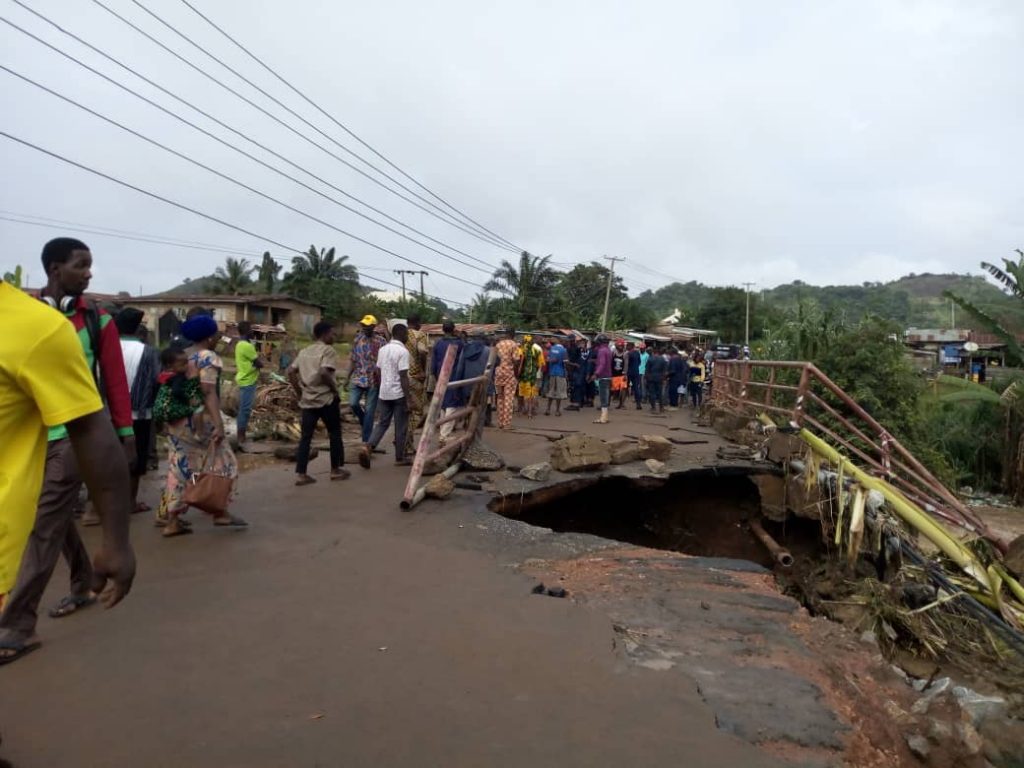 This was the second time the flooding would cause chaos on the road. Four persons were said to have been swept off by the flood but three of them were rescued.

Other areas of Ado Ekiti that witnessed flood on Monday evening included Eminrin,  Ajilosun, 132KVA area of Omisanjana and others. The bridge became flooded after a torrential downpour that began around 7.30pm and lasted till 9pm. The collapse of the bridge hindered human and vehicular movements for several hours.

Yesterday morning, the water level was still so high that commuters along Afe Babalola University, Federal Polytechnic and Ikare Akoko in Ondo State and those coming into the state capital had to park their vehicles and waited for several hours before the water subsided for them to trek through. A resident of the area, Mr. Sunday Akomolafe, explained that the victim and three women were coming from Abuja and wanted to navigate the flood only for them to be overwhelmed by ferocity.

“Three of them were rescued and taken to the hospital but the man was not all that lucky as he drowned and his body was recovered around 8am today,” he said.

The Deputy Governor, Chief Bisi Egbeyemi, who visited the scene, appealed for calm, saying the state government will ensure that the bridge is put back to proper shape.

The police public relations officer in the state, Caleb Ikechukwu, confirmed the death.

“Yes, I can confirm to you that one man died after he was drowned in the flood. His body had been removed and taken to the mortuary,” he said.

The Special Adviser on Road  Transport and Infrastructure to Governor Kayode Fayemi,  Adunmo Rufus, who was at the bridge supervising the palliative work being done, said the disconnected section will be reconnected within the next few  hours.

“We are embarking on palliative works till dry season when the road will be awarded. What we need here is a new bridge that can accommodate more water. The 60×60 bridge is no longer fashionable. We are piling stones and granites on the collapsed lane. We are going to open one lane for commuters and motorists to use pending the time the palliative measures will end that will put the second lane back.”
Top Stories