Johnson himself told The Sun newspaper that he had '10 days' to listen to EU counter-offers and find a compromise. 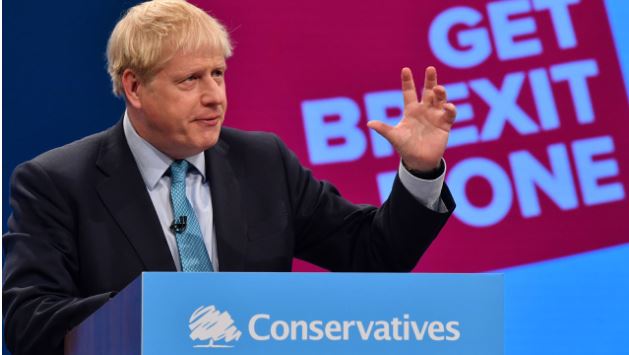 Prime Minister Boris Johnson
Prime Minister Boris Johnson will submit “final” proposals for a new Brexit agreement on Wednesday, officials said, warning that if the European Union did not engage with them, Britain would leave the bloc this month with no divorce deal.
Johnson will provide details of what his Downing Street office said was a “fair and reasonable compromise” during his closing speech to his Conservative party’s annual conference in Manchester.
But a statement issued late Tuesday stressed this was a “final offer” and Johnson would be keeping his pledge to leave the EU on October 31, with or without a deal.
Johnson himself told The Sun newspaper that he had “10 days” to listen to EU counter-offers and find a compromise.
“If there’s a deal to be done, it could be done in that time,” said Johnson. “If there isn’t, then we’ll know. That’s the truth.”
Leaked blueprint
Johnson, a leading “leave” campaigner in the 2016 EU referendum, took office in July vowing to deliver Brexit at the end of this month in all circumstances.
But like his predecessor Theresa May, he has struggled against a hostile parliament and the complexities of untangling four decades of EU integration.
Johnson has pledged to renegotiate the exit terms May agreed with Brussels, which were rejected by the British parliament three times.
He is now focused on replacing the controversial “backstop”, a longstanding sticking point that aims to keep an open border between British Northern Ireland and EU member Ireland after Brexit.
May’s proposal would have done this by keeping Britain in an effective customs union with the EU, which critics argued would force London to abide by the bloc’s rules indefinitely.
The Daily Telegraph newspaper reported that Johnson instead wants to keep Northern Ireland in the EU’s single market until 2025, but in a customs union with the rest of Britain.
This would potentially create two new borders — regulatory checks between mainland Britain and Northern Ireland along the Irish Sea, and customs checks on the island of Ireland itself.
After that, a new power-sharing authority in Northern Ireland would decide whether to keep the region aligned with EU or UK standards, the newspaper said.
Top Stories