The PPRO stated that the suspect had confessed to the crime, blaming the act on Satan and pleading for forgiveness. 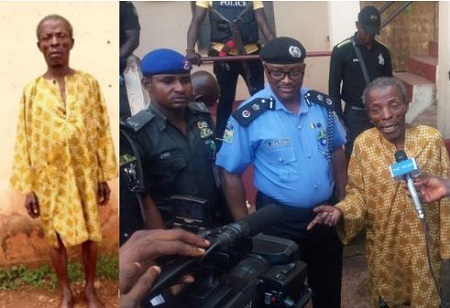 The suspect, Boniface Onoja
The Enugu State Police Command has arrested a 75-year-old man identified as Boniface Onoja of the Ugbaike community, Enugu Ezike in the Igboeze North Local Government Area of the state for allegedly defiling an 11-year-old girl.

A statement by the state Police Relations Officer, Ebere Amaraizu, indicated that the incident took place at the Community Secondary School, Ugbaike, where the suspect worked as a security guard.

Amaraizu, a Superintendent of Police, said the suspect had on August 30, 2019, lured his victim into a room provided for security guards in the school, where he allegedly perpetrated the act.

According to the police spokesman, luck, however, ran out of the suspect as he was caught in the act by a good Nigerian, whom the suspect was said to have tried to influence not to disclose the act to members of the public.

Amaraizu said, “Police operatives in the Igboeze North Local Government Area of Enugu State have arrested a 75-year-old man for alleged defilement of a girl of about 11 years on August 30, 2019.

“The alleged incident had taken place in one of the structures at the Community Secondary School, Ugbaike, where the suspect is working as a security guard.”

The PPRO stated that the suspect had confessed to the crime, blaming the act on Satan and pleading for forgiveness.

The suspect, according to Amaraizu, added that he had served as a security guard in the school for over 20 years and had not been found wanting.

“This is act of Satan; please forgive me as I have not done this before,” the suspect was quoted to have pleaded.

Amaraizu said Onoja was already helping the police in their investigation and would be charged soon.
Top Stories