A female banker has been nabbed and arraigned for allegedly stealing her bank customers' money. 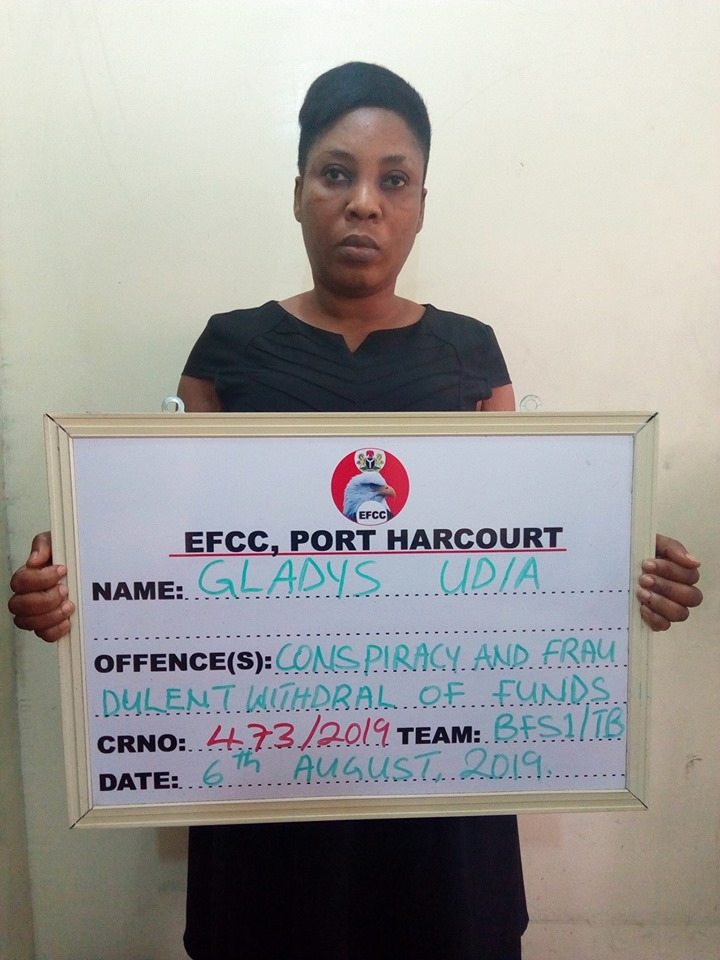 Udia’s trouble started when a petitioner, Benjamin Akerele, a customer of Union Bank, Port Harcourt, sought the intervention of the EFCC over the theft of his money in the bank.

The petitioner alleged that sometimes between July 24 and August 6, 2019, a total sum of N3,476,700.00(Three Million, Four Hundred and Seventy Six Thousand, Seven Hundred Naira only) was fraudulently withdrawn from his account domiciled in a Union Bank's Sokoto branch. Investigation carried out by the bank’s internal affairs unit revealed that the principal suspect, Gladys Udia, a staff of the Ikwerre Road branch in Port Harcourt was captured by the bank's CCTV Camera taking photographs of the customer’s BVN printout page with her mobile phone and sent same to her accomplices, who subsequently carried out a limit enhancement on the customer’s account at the Bori branch, thereby granting them access to the account.

Investigations also revealed that between July 25, 28 and August 6, 2019, a total sum of N3, 476, 700.00 Three Million Four Hundred and Seventy Six Thousand, Seven Hundred Naira was fraudulently transferred by Udia from the account of Akerele to several accounts of her accomplices.

The defendant pleaded not guilty to all the seven-count charges when read to her.

In view of her plea, Prosecuting Counsel, M. T. Iko prayed the court to fix a date for commencement of trial.

However, counsel to the defendant, U. A Ekwere immediately informed the court of a pending application for the bail of the defendant. He also prayed the court to grant the defendant bail in liberal terms which was not opposed by the prosecution counsel.

Justice Abubakar granted the defendant bail in the sum of N1,000.000.00( One Million Naira only) and one surety in like sum. The surety must be a civil servant on grade level 10 and resident in Port Harcourt. The surety must be verified by the prosecution.

The Judge also ordered that the defendant be remanded in prison custody pending the fulfillment of her bail conditions, while the matter was adjourned to October 10, 2019 for continuation of trial.
Top Stories