Busted! See The Men Who Sold A Stolen Vehicle For N750,000 After Drugging Owner (Photo)


Robbery suspects who sold a stolen vehicle after drugging the real owner, have been finally nabbed. 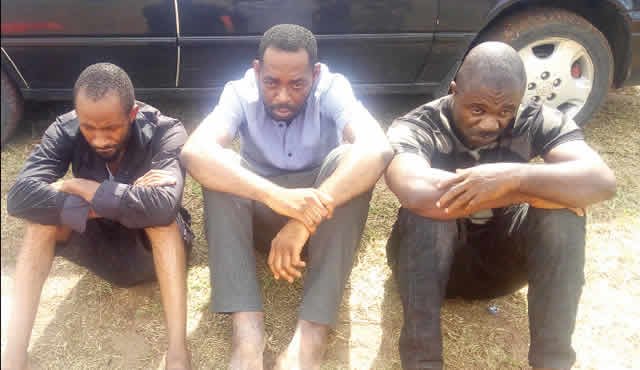 The suspects
According to a report by Punch Metro, the members of a syndicate, who specialise in drugging car owners before stealing their vehicles in Imo and Rivers states, have been arrested by the police.

Parading the suspects, the Imo State Commissioner of Police, Rabiu Ladodo, said the suspects were a torn in the people’s flesh.

He said it took the command time to track down members of the syndicate after they had in March snatched a vehicle from one Chukwuemeziem Nwoke after drugging him and he became unconscious.

The CP stated, “We acted on a tip-off by one Chukwuemeziem Nwoke that his blue Toyota Camry with number plate ABC 20 AT and phone were snatched from him on March 25 by unknown persons.

“One of the suspects was trailed and arrested at Orji in Owerri. Upon interrogation, he confessed to the crime and mentioned his accomplice as one Kingsley Okeke, a native of Amauzu in the Ahaiazu Mbaise Local Government Area of the state but resident in Rivers State, who helped to sell the vehicle to one Kingdom Ugochukwu, who is a native of Chokocho Echie in Rivers State.”

The CP added that the suspects, after stealing the car, repainted it, fixed tinted glasses on it and changed the number plate before selling it for N750,000.

Ladodo said the suspects would be prosecuted to serve as a deterrent to other criminals in the state.

One of the suspects, Ugochukwu, told journalists that he sold the vehicle for N750,000 and gave his accomplices N20,000 as a commission.
Top Stories