A man has caught a ritual killer carrying his own mother's skull in a community in Ogun state. 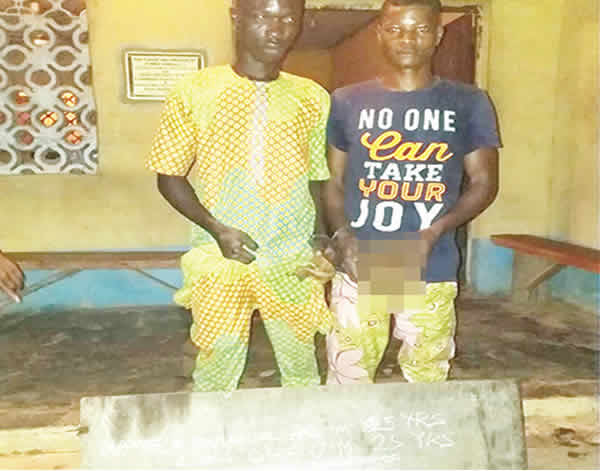 Aro and Olofinju with the skull

According to a report by Punch Metro, the Men of the Ogun State Police Command have arrested two suspected ritualists after being caught by a man, Amoo Bankoke, with the skull of his mother.

The suspects, Emmanuel Aro, 25, and Anu Olofinju, 25, were reported to have sneaked into a cemetery at Eggua in the Yewa North Local Government Area of the state and exhumed the skull from the grave.

The Police Public Relations Officer in the state, Abimbola Oyeyemi, confirmed the development in a statement on Sunday.

Oyeyemi said the suspects were arrested last Friday on the Ijoun Road in Eggua following a complaint by Bankole at the Eggua Police Station.

According to Oyeyemi, Bankole told the police that he sighted the two suspects at the cemetery, where the remains of his mother were buried a few months ago, digging the grave and that he suspected them to be up to something sinister.

He added, “Upon his report, the DPO, Eggua Division, SP Kehinde Oyekangun, quickly mobilised his men and moved to the scene, but met the two men on the road.

“They were promptly accosted and upon a search of the bag they carried, the skull of a woman was found in it.

“The complainant identified the skull to be that of his mother.

“Upon interrogation, the two suspects confessed to the crime and admitted that they intended to use the skull for money rituals.”

The PPRO said the state Commissioner of Police, Bashir Makama, had ordered the immediate transfer of the suspects to the State Criminal Investigation and Intelligence Department for further investigation and prosecution.

In a related development, two men, Muhammed Sanni, 56, and Raimi Abdulateef, 20, were on Friday arraigned before an Osun State Magistrates’ Court sitting in Osogbo for having in their possession a human skull.

The men, who appeared before Magistrate Olusegun Ayilara, were said to have planned to use the skull for money rituals.

They were arraigned on three counts bordering on unlawful possession of a skull and indecent interference with the head of a corpse.

The accused, who had no legal representation, were said to have exhumed and severe the head of an unidentified corpse around Okeola area of Osogbo.

The police prosecutor, ASP John Idoko, stated that the suspects were arrested on September 24, 2019, around 2.45am.

The appli cation of the accused for bail was not granted by the court.

Magistrate Ayilara, in his ruling, ordered the accused to be remanded in a correctional centre and adjourned the case till December 18, 2019.
Top Stories