Razak appealed to the national body of the party to maintain zoning by ensuring that the presidency is zoned to the South in 2023. 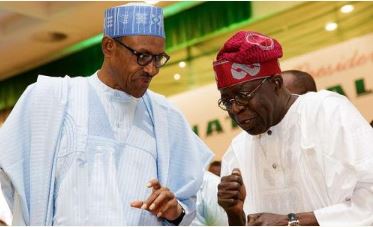 President Muhammadu Buhari, Bola Ahmed Tinubu
Lanre Razak, a chiefain of the All Progressives Congress (APC) and close ally of the party’s national leader, Bola Tinubu, has said that he(Tinubu) is ‘eminently’ qualified to succeed President Muhammadu Buhari in 2023.
Speaking on speculations that Tinubu is interested in contesting for the presidency in 2023, Razak said the national leader of the APC played a pivotal role in ensuring the defeat of the Peoples Democratic Party(PDP) and has helped stabilise democracy.
He then appealed to the national body of the party to maintain zoning by ensuring that the presidency is zoned to the South in 2023.
“Nigerians do not need to look far to know that the APC national leader, Bola Tinubu, is the man that the presidential cap fits for the next election. He is eminently qualified to succeed President, Muhammadu Buhari and build on the foundation the latter is currently building.
“ Tinubu is an achiever and his democratic credentials, vis a vis his leading role in forming a coalition that shoved aside the Peoples Democratic Party (PDP’s) misrule has made it crystal clear that, with him in the saddle in 2023, Nigeria would be better for it,” Razak said.
On speculations that Buhari may seek a third term, Razak said the president is “too principled to fall for such booby traps from professional sycophants,” exuding confidence that, “he will vacate the seat in conformity with the constitutional provision.”
On the performance of Governor Sanwo-olu of Lagos, Razaq, said: “With the way the governor has started, it is crystal clear that peoples’ support is required to partake in this all inclusive government for the good of all of us. He is on the right path and is performing well."
Top Stories