The story has been told of a Nigerian policewoman who saved a robbery victim from death in Lagos state. 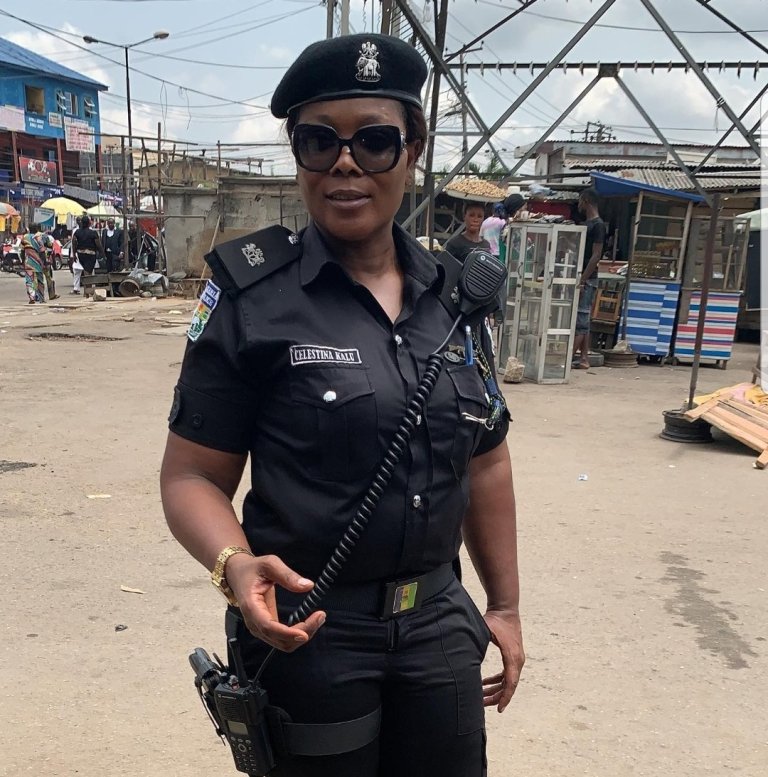 Hero cop, SP Celestina Nwankwo
But for a rare demonstration of regard for human life and dedication to duty by a hero policewoman, Ajobor Friday a 25-year old man would have lost his life.
Friday was shot by hoodlums, who attempted to dispossess him of his cash and phone at Ogudu. Friday works as a private guard was in the company of a lady, when two hoodlums accosted him, demanding for cash. He politely told them he had no cash on him, and they left.

Not long after same miscreants returned and demanded he gave up his phone in place of the money. Again he politely told them the phone was not his, before throwing it to his female companion.  Angered by his action, one of the hoodlums shot him in the stomach at close range. The sound of the gunshot sent people scampering for safety at around 8 pm.

Crime Guard, reliably gathered that when information of the incident reached the Ogudu Police division, the Divisional Police Officer, (DPO) SP Celestina Nwankwo, deployed a team of policemen to the scene, who met Friday writhing in pains in the pool of his blood.
The policemen rushed him to Gbagada General Hospital, where he was administered only first aid treatment. Further treatment couldn’t be carried out because it was discovered that his stomach had been perforated in eleven places by the pellets. He was further rushed to Federal Medical Center, Ebutte Meta, where he was turned back for lack of bed space at the government hospital.

He was furthered rushed to Military Hospital, but no treatment could be carried out because of a lack of funds. Crime Guard reliably gathered that in an attempt to raise funds for Friday’s treatment, his company was contacted. But a management staff was quoted as saying that Friday wasn’t on duty when the incident happened, so the company would not take responsibility for his medical bills.

By 12 midnight, already looking pale and could barely speak, Friday was rushed to Lagos State University Teaching Hospital, (LASUTH), where he was turned back again due to lack of bed space at the government hospital.
DPO to the rescue

The policemen after being turned down by LASUTH, contacted SP Celestina Nwankwo, who immediately drove down to LASUTH with the only cash on her. According to a friend of the victim, the DPO became angry when she was informed about the lack of bed space.

She told the officers to drop Friday wat LASUTH, and threatened to hold the hospital liable, should Friday lose his life. ” As she was about to leave, Friday mustered all the strength he could and said, “mummy please dont leave me to die”. She promised to do all she could for him.

Eventually, bed space was arranged, and treatment began. But as the bed space issued was solved, another issue arose, Friday needed a blood transfusion, but there was reportedly no blood in the hospital’s blood bank, and no donor on the ground to donate.

Determined to fulfill her promise to Friday, SP Celestina Nwankwo reportedly offered to donate blood to Friday, but emergency blood surfaced, and the transfusion began. After the operation, Friday experienced organ failure and he was put on life support where he spent nine days at the Intensive Care Unit (ICU), with a cost of N35,000 per day.

In a phone conversation with Ajobor Friday, all he could mutter was “I would have been dead by now but for an angel of God in the person of SP Celestina Nwankwo. Now I believe the police is really our friend”.

In an era where news of police brutality and oppression fills the airwaves, this act of selflessness, dedication and empathy by SP Celestina Nwankwo must be celebrated and commended.
***
Source: Vanguard
Top Stories