A Nigerian university student has revealed how some operatives of the Federal Special Anti-Robbery Squad shaved his head. 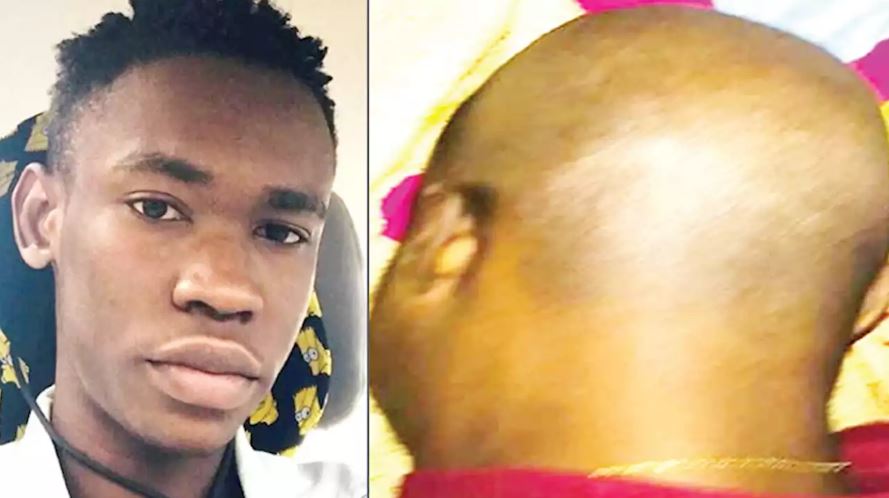 Efosa
Aspiring musician and student of Ambrose Alli University, Ekpoma, Efosa Osayande, speaks on his recent encounter with some operatives of the Federal Special Anti-Robbery Squad of the Nigeria Police Force, in this interview with ENIOLA AKINKUOTU

You made a social media post about your head being shaved by some FSARS operatives. Can you tell us how it happened?

I was travelling in a commercial bus, on my way to school from Benin City last Friday, when some men of the Federal Special Anti-Robbery Squad halted my journey. I was travelling in company with my friend, Washington. One of the policemen looked into the vehicle and stared at the passengers. Immediately the policeman spotted us, he said he must shave our heads. He ordered the bus driver to park on one side of the road.

What were the other passengers doing when this was happening?

Everyone was begging the policeman, but he did not listen. He raised his rifle, pointed it at us and threatened to shoot if we failed to keep quiet. He ordered Washington and I to get out of the vehicle and walk ahead of him.

The policeman told the driver to wait for us, promising that the shaving would be quick. As we were walking, another policeman told us to cross to the other side of the road and asked us to sit on the ground. He took a razor from a nearby tree and started to shave my friend’s head.

While this was going on, the bus driver walked up to a police patrol van and appealed to their leader to prevail on his men to stop. Although the latter asked his men to leave us alone, they refused. After shaving my friend’s head, they went on to shave mine, injuring my scalp in the process.

What kind of hairstyle did you have?

My hair was just a little rough, but my friend wore dreadlocks.

What was the reason they gave for shaving your head?

They didn’t give any reason. They just said they wanted to do it.

When exactly did this happen?

Did you see the inscription on their patrol van?

I didn’t get a clear view of the van, but I saw Federal SARS written on their uniforms.

Were they all in uniforms?

Were you able to see their name tags?

Unfortunately I wasn’t able to see their name tags.

How many policemen were they?

I saw three policemen. One of them shaved our heads. The second policeman was the one who stopped our vehicle, while the third policeman sat in the patrol van.

Can you recall the exact spot where the incident occurred?

I cannot say for sure, but the spot was a few kilometres away from a Jehovah Witness camp, on the road to Ekpoma.

Did they accuse both of you of being cultists?

No, they didn’t. They didn’t even say they wanted to check our cell phones or accuse us of being ‘Yahoo’ boys (fraudsters). They just said they wanted to shave our heads.

Why didn’t you resist the policemen?

The way they pointed their guns at us was scary enough. I didn’t want any kind of mistake to happen?

Have you reported the matter to the police?

I am scared of reporting to the police because I don’t know what their reaction will be. I have a feeling that they will just sweep the matter under the carpet.

Have you been threatened in the past because of your hairstyle?

Yes. There was a time when some policemen ordered me out of a vehicle and searched my cell phone. Although they couldn’t find anything incriminating on my phone, they still went on to call me a ‘yahoo boy’. When I tried to explain, they said I should keep quiet and kept calling me a fraudster.

I told them that I was a musician and they could call my mum to confirm, but they refused to allow me to make any phone call. Instead, they told me to follow them to their station. This is the second time that I have suffered in the hands of the police.

Are you truly a student of Ambose Alli University?

I am a 100 level student of Health Science in the university.

Will you grow your hair again or just remain on low cut?

I will grow the hair, but I will do away with the former hairstyle since it has become a big problem to the police. I will stick to the low cut.

You said the policeman, who shaved your head, injured you in the process. Have you gone for medical treatment?

Yes, I have had a PEP (Post-Exposure Prophylaxis).

Do you know why the police shave the heads of youths nowadays?

I really don’t know what is wrong with Nigeria. I am just 18. These hairstyles are common among young people of my age. In my opinion, what the police are doing to youths is nothing but wickedness. It would have been better, if they asked us to cut out hair. Exposing us to health risks is sheer wickedness on their part.
***
Source: The PUNCH
Top Stories