After making it clear to his players he wouldn't be travelling with them, Valdes knew the writing was on the wall. 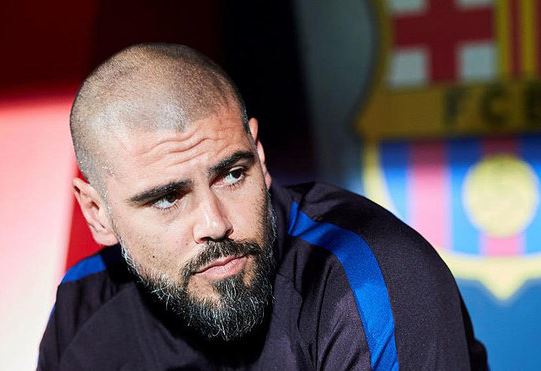 Victor Valdes
Away from the intense focus of LaLiga Santander football, one of the biggest stories of the weekend came when Barcelona's Under-19 coach informed his players he wouldn't be travelling with them for the fixture with Tarragona, and there are reasons for the separation.Valdes' departure was confirmed by Los Cules on Monday afternoon, in an unfortunate, unforeseen development that few in power at the club wanted.
After making it clear to his players he wouldn't be travelling with them, Valdes knew the writing was on the wall, and the meeting of the club's technical department was a mere box-ticking exercise.The root of them problems the former Manchester United goalkeeper has faced began on day one in the job, with several episodes having played out both privately and in the public eye since then.
Issues with Kluivert
His relationship, or lack thereof, with Patrick Kluivert, the head of Barcelona's academy, has been the major problem.Once teammates for a brief period at Barcelona, the pair have not been able to agree on much since they started working together in the summer of 2019.The most recent discussion between the pair came on Friday with the Dutchman reproaching Valdes for not playing with the 4-3-3 formation in which all Los Cules' youth teams usually use.Valdes responded in an expected prickly fashion, suggesting that it was his team and he preferred to play 4-4-2.
Removing his team from the Otten Cup
Valdes first big decision as Under-19 coach was to withdraw his team from the Otten Cup, due to the fact he considered that the rest periods between matches weren't adequate."I want to say that given the high level of risk with injures to my team, or perhaps even something more serious at a cardiac level, I have to make this decision," he explained."I assume all the guilt and responsibility for what this may generate."
Didn't attend the coaches meeting
Valdes didn't attend the coaching meeting led by Francisco Seirul·lo, yet all the other coaches at the club did.There was also a degree of resentment towards the former stopper after he didn't attend the coach's dinner, whilst the rest of his staff did.
Complaints over the use of Estadi Johan Cruyff
"The first day, when I saw that beautiful stadium, I was excited," he declared."I thought that was going to be our stadium."Unfortunately, it's not like that but I am still fighting."The former Spanish international had grown weary at the lack of time his Under-19 team had been allocated to play at the Estadi Johan Cruyff, the crown jewel of the Joan Gamper Sports City complex.
Disagreements with club leaders over players
Another source of contention between Kluivert and Valdes came as a result of the little play time which the Spaniard was giving certain players whom the club believe to be the outstanding prospects at that level.Ilaix Moriba is one such player, with the Catalan giants betting a lot on him for the future, and the problem for Valdes is that his team selections weren't even getting good results either, there seemed little reason not to play Moriba.
The Inter fiasco
UEFA rules dictate that in any competition run by the governing body, each team must be in the stadium two and a half hours before the scheduled kick-off time.However, Barcelona's Under-19 team fell foul of that rule by arriving to the Estadi Johan Cruyff half an hour late for the clash with Inter.This was because Valdes wanted to give his team talk in the Ciutat Esportiva, and it resulted in the Blaugrana being handed a UEFA sanction.
Petty issues with the press officer
The most bizarre issue came between Valdes and the club's press officer, with the 37-year-old unhappy that a table and chair wasn't provided for him at a press conference.The club believes that when situations dictate it, coaches should be willing to conduct their press responsibilities whilst standing, just as Barcelona B coach, Garcia Pimienta, does.
Top Stories