Seven men who engaged in SIM swap fraud in Kaduna state have been nabbed by the Economic and Financial Crimes Commission. 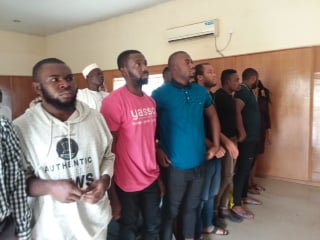 They were arraigned on two counts bordering on conspiracy and obtaining by false pretence before Justice Mohammed Tukur of the Kaduna State High Court.

Operatives of the EFCC had earlier in September, arrested six of them. They specialize in defrauding innocent Nigerians by using bank details obtained through their SIM cards swapped on Automated Teller Machine ATM.

One of the charges reads: “That you, Okafor Samuel Obinna, Chigbo Pascal Chidi, Oha Chukwujekwu, Ahamefula Francis Izuchukwu, Ugonna Nelson Owete, Ikenna Henry and Chinyere Aniobi Jessica and others now at large sometime in 2019 at Kaduna Judicial Division of the High Court of justice Kaduna State with the intent to defraud falsely obtained the sum of N2,911,480.00 (Two Million Nine Hundred and Eleven Thousand Four Hundred and Eighty Naira) from the Diamond Bank (now Access Bank)account of one Abdulrauf Bolaji, which was transferred after his SIM swap to several accounts under the pretence that the said sum was transferred by him, which you all knew to be false and thereby committed an offence contrary to Section 1(1)(a) of the Advance Fee Fraud and Other Fraud Related Offence Act, 2006 and punishable under Section 1(3) of the same Act.”

They pleaded “not guilty” to the charges.

Following their plea, counsel for the EFCC, S.H. Sa'ad urged the court to fix a date for commencement of trial, and for the remand of the defendants in Correctional Service

Counsel for the defence, Usman Liman, however, informed the court that his clients had opted for a plea bargain, and intended to change their plea to “guilty”.

In a short ruling, Justice Tukur, ordered that six of them be remanded in Correctional Service custody, while Jessica should be remanded in EFCC custody due to her ill health and fixed October 11, 2019 for “hearing on the plea bargain application”.
Top Stories