A whopping N1.5 billion has been proposed by Buhari as money to be used for upgrade of Presidential aircraft. 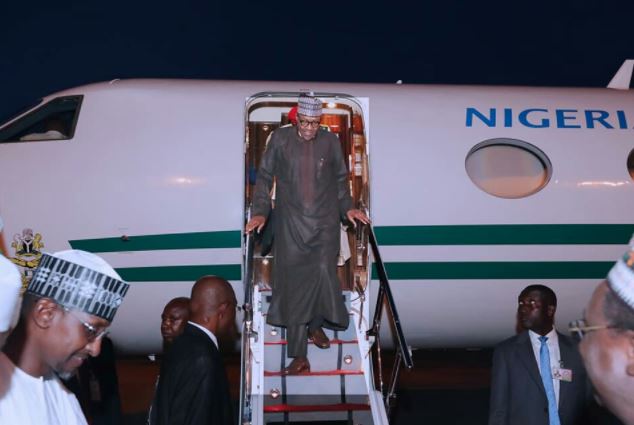 President Muhammadu Buhari
Nigeria's President Muhammadu Buhari has proposed to spend N1.492bn on the upgrading of some of the aircraft in the Presidential Air Fleet in 2020, according to a Punch report.
The report revealed that the sum is apart of the N200.994m the President will be spending on the overhaul of engines of some of the aircraft in the fleet next year.
The figures are contained in the details of the 2020 Appropriation Bill that Buhari presented to a joint session of the National Assembly on Tuesday.
Details of PAF’s budget are captured under the budget of the Office of the National Security Adviser.
According to the details, N792m will be spent on what is termed “mandatory upgrade and installation of live TV and Internet service on BBJ (5N-FGT).”
Also, N50m will be spent on “compliance with mandatory upgrade and installation of Internet service on G550 (5N-FGW).”
Apart from these, another N650m is being proposed to be spent on “compliance with mandatory upgrades on PAF aircraft.”
All the expenses are to be spent on ongoing projects.
Further details of the budget showed that PAF will spend N250m on aviation fuel during the year.
The sum is part of the N467.86m budgeted for fuel and lubricants (general) for 2020.
Other expenses in that category include the N115.86m budgeted for motor vehicle fuel; N70m for plant/generator fuel; N30.2m for other transport equipment fuel; and N1.8m for cooking gas/fuel.
The PAF will also refund N1.22bn to Asset Management Corporation of Nigeria for asset acquisition.
The asset acquired is not stated in the budget details.
The PAF will also be spending N120m on the construction of armoury while N178.273m will be spent on the renovation of the HQ 011 PAF complex and aircraft hangar.
Fire fighting vehicle will cost PAF N90m during the year while N89.413m will be spent on the purchase of six pieces of FIDO X3 Military Grade Scanners.
Meanwhile, the suspended national carrier, Nigeria Air, will gulp a whopping N4.998bn in the 2020 fiscal year.
According to the details of the Ministry of Aviation’s budget, “working capital for establishment of national carrier” will cost N4.694bn while “consultancy for establishment of national carrier” will gulp N304m.
Under the budget of the Office of the Secretary to the Government of the Federation, national events (Independence Day and Democracy Day) will cost N255m; utility vehicles for former Heads of State (replacement) will cost N100m while purchase of office equipment and furniture for political aides and Shehu Shagari Complex will cost N355.475m.
Top Stories