Pandemonium As Man Opens Fire Inside Church During Wedding Ceremony


In what will come across as a really shocking development, a man has opened fire inside a church during a wedding. 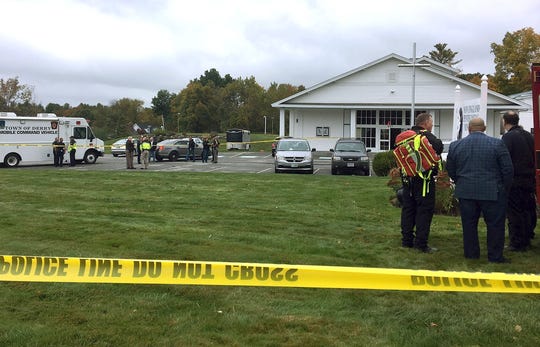 The scene of the sad incident
Wedding guests “gang-tackled” a man who opened fire and injured two people Saturday morning at a wedding ceremony at a church in Pelham, New Hampshire, according to police.

USA Today reports that the shooting occurred at New England Pentecostal Church in Pelham, a city of 13,000 in southeast New Hampshire near the Massachusetts border.

“From my understanding, they basically gang-tackled him,” Roark said.

Police said the third person sustained minor injuries and was also taken to a nearby hospital.

Lowell General Hospital in Massachusetts confirmed that one patient had been admitted shortly after the incident and then transferred to a hospital in Boston by Saturday afternoon.

Roark said the suspect, armed with a handgun, arrived after the wedding had begun. Police estimated that about 40 people were in attendance.

“This does not seem to be a random event,” Roark said.

Police did not release any information about the wedding parties or their relationship to the gunman.

The hospital could not provide information on the patient’s condition.