What Buhari Told Melaye After Budget Presentation In Abuja (Photo)


Details have emerged about a trending photo showing Dino Melaye and President Buhari exchanging pleasantries during the recent budget presentation. 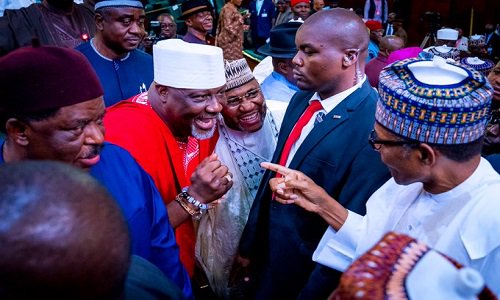 President Muhammadu Buhari and Dino Melaye during budget presentation
Since the picture emerged of President Muhammadu Buhari pointing his index finger at Senator Dino Melaye after he presented the 2020 budget at the National Assembly on Tuesday with Dino responding by hailing him with a salutary fist, there have been speculations as to what the President was telling the senator.
Observers who have followed the confrontational stance of Melaye with the Buhari government and the ruling All Progressives Congress (APC) closely were quick to guess that Buhari was issuing a threat to the cantankerous senator. But a source who was at the scene of the interaction has told Sentry that what Buhari said to Melaye was nothing of a threat but a question that is pregnant with meanings.
According to the source, Buhari simply asked Melaye: “You mean you are still in this chamber?”
Of course, the question is open to different interpretations considering the issues around Melaye. Since his days as a member of the House of Representatives, the senator who until he was sacked by the Court of Appeal yesterday represented Kogi West has come across as a querulous fellow whose presence is known to provoke crisis in the legislative chambers.
But he has been unusually quiet in the 9th Senate; a development that many has attributed to the failure of the former Senate president, Dr Bukola Saraki, to return to the upper chamber following his defeat by the APC candidate in Kwara Central during the last National Assembly elections.
Still, other watchers of events would interpret Buhari’s question as an indication that Buhari had already got wind of the direction of the Court of Appeal judgment that sacked Melaye on Friday and was simply expressing surprise that the deposed senator was still in the chamber.
Source: TheNation
Top Stories