Three men have reportedly drowned while they were trying to escape being arrested by the police in Lagos. 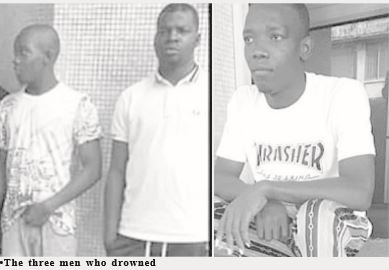 Did the police cause the drowning of three young men at the wee hours of Thursday at Apongbon seaside in Lagos?

The above question has remained unanswered as controversial continues to trail the death of David, Femi and another friend of theirs.

It was gathered that the deceased and seven other of their friends were at the seaside around 1am when policemen alleged to be men of the defunct Federal Special Anti-Robbery Squad (FSARS) stormed the place.

To evade arrest, the men were said to have ran into the lagoon where they all hot trapped.

While six of the men were said to have been rescued later that day, three were recovered dead and one still missing at the time of this report.

According to a social media user Olarenwaju Ganiu who shared details of the incident, the policemen were raiding the neighbourhood.
Read Also: Police rescue nine kidnapped children in Kano

But the Lagos State Police Command denied conducting any raid or patrol in the community, appealing to the residents to come forward with their complaints.

Spokesman for the command Bala Elkana, a Deputy Superintendent of Police (DSP) told The Nation Sunday night that the Divisional Police Officer in charge of the area had asked the people to describe the policemen or their vehicle but they couldn’t.

“The problem we are having is that everything is blamed on SARS or police. I have told you we did not have any operation in that area on Thursday. We did not.

“This is a serious issue that no DPO will want to hide. They would have quickly notified the command and put up a defence for their action. But I have called the DPO, he said he also heard it and asked the people who the policemen were but no one could tell him.