An eyewitness from Okehi, said the clashes had also claimed several lives in Ulakwo, Igbodo and Mba communities in Etche LGA. 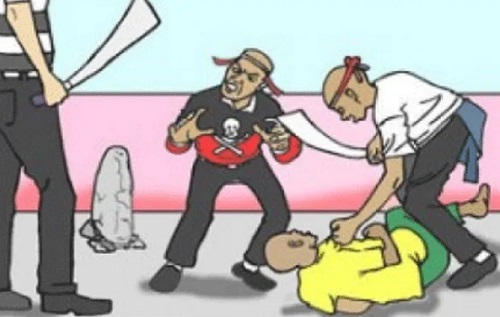 At least, four persons were reportedly killed in Okehi and three neighbouring communities in the Etche Local Government Area of Rivers State during clashes between rival cults

Several houses were said to have been set ablaze during the incident that began on Sunday night.

It was gathered that trouble started when some members of Degbam cult shot and killed a man who was a member of Deywell in Okehi community.

The development led to several clashes in other communities within Etche in what appeared to be reprisals by rival cults.

An eyewitness from Okehi, said the clashes had also claimed several lives in Ulakwo, Igbodo and Mba communities in Etche LGA.

“I heard that members of the Degbam group killed a member of the Deywell group on Sunday and this (Monday) morning, another person was killed in Ulakwo; one each in Igbodo and Mba communities.

‘’About three or four houses have also been burnt down in Okehi, while thousands of residents have fled for fear of being caught in the middle of the crossfire,” the source said.

Omoni said, “‘No life was lost. Men of the tactical team have been asked to relocate to the troubled places in order to forestall any form of reprisal.’’