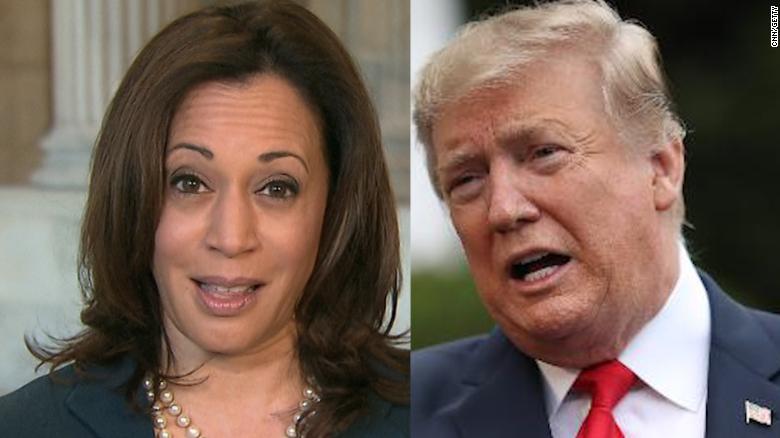 Appearing alongside 11 other aspirants in the live television debate, Harris accused Trump of abusing the platform where he has over 65 million followers.

“Here we have Donald Trump, who has 65 million Twitter followers and is using that platform as the President of the United States to openly intimidate witnesses, to threaten witnesses and obstruct justice.

“He and his account should be taken down," she said, adding that the Aug. 3 mass shooter in El Paso, Texas, was inspired by Trump’s hate tweet against Latinos.

As a matter of corporate responsibility, she argued, “Twitter should be held accountable, and made to take down that site; it is a matter of safety and corporate accountability’’.

The California senator was responding to a question on whether it was necessary to break up big tech companies like Facebook and Twitter over their use for election interference by foreign interests.

She said she was surprised that her rival, Sen. Elizabeth Warren from Massachusetts, opposed her idea of what should be the rules around corporate responsibility.

Harris said it was “grave injustice" for the social media accounts of ordinary people to be suspended over abuse, but those of powerful individuals like Trump were spared.

Warren responded saying, “I don’t just want to push Donald Trump off Twitter. I want to push him out of the White House. That’s our job.”

Harris disagreed, urging her to back the campaign for the president’s Twitter account to be shut down. Also speaking on the subject, entrepreneur and philanthropist, Andrew Yang, said breaking up the tech companies would not solve the problem, and suggested the use of “21st century solutions’’.

Sen. Cory Booker (New Jersey), said American democracy was in “massive crisis’’ with the way the big tech companies were being used not only in anti-competitive practices but also in undermining the country’s democracy.

Booker said such practices used in the 2016 presidential election had not been corrected, and as president, he would pursue reform in America’s anti-trust laws.

The Russian government is accused of creating thousands of social media accounts to harm the campaign of the Democratic candidate, Hillary Clinton, in favour of Trump during the 2016 election.