A beauty pageant contestant has been allegedly assaulted by a pageant boss and a fetish priest. 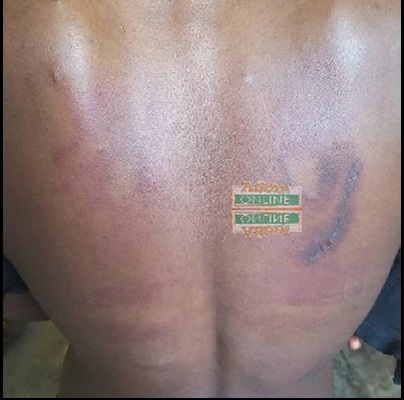 The lady was assaulted

Chief Executive Officer of Commonwealth Beauty Pageant and a fetish Priest were arrested on  Monday, October 14, 2019, at 20.30pm for allegedly assaulting a contestant in Ghana.

According to Ghanaweb, the suspects assaulted 24-year-old Nana Ama Essien, a third runner up over a missing GHC500.

The report says that Essien and eight other contestants were taken a shrine that belonged to the Shito, the fetish Priest, at Akyem Kukurantumi over her (CEO of Commonwealth Beauty Pageant) missing GHC500 and other items between July and September this year.

Essien was said to be tortured and assaulted with the edge of a cutlass by two male attendants who are now at large, causing bodily injuries, on the instructions of the fetish Priest to induce a confession.

The Deputy Public Relations Officer of the Eastern Regional Police Command, Sergent Francis Gomado, who confirmed the arrest said the suspects were in custody and that investigation was ongoing.