A 4-year-old boy who was missing has been found and reunited with his family in Akwa Ibom State. 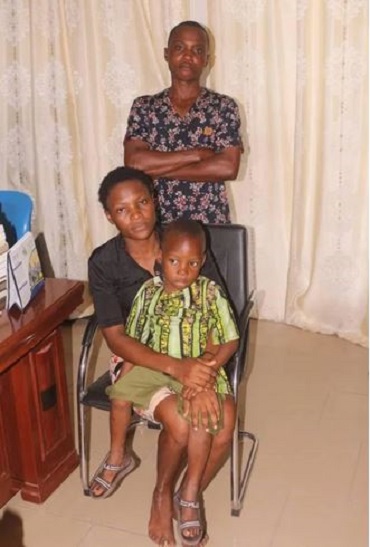 Commissioner of Police reunites Samuel Asuquo with his mother.

The Police Command in Akwa Ibom said it had reunited 4-year-old Master Samuel Asuquo, who got missing on Sunday, with his family.

Mr. Zaki Ahmed, the Commissioner of Police in the state, announced this in a statement issued by SP Odiko Macdon, the Police Public Relations Officer (PPRO) for the command in the state on Wednesday.

The commissioner, who lauded Mr. Ekemini Stanley who found Asuquo, warned those behind child stealing and traffickers to stay away from Akwa Ibom or face the wrath of the law.

He explained that Asuquo, alongside his cousin, Michael Godswill worshiped at Deeper Life Bible Church on IBB Way in Uyo on Sunday. Ahmed further explained that after the service, the whereabouts of Asuquo could not be determined.

“A good Nigerian, Ekemini Stanley, residing at No. 4 Ukpong Ebe Street, Uyo found the child along his street and took him to the ‘C’ Division Police Station, Aka/Etinan. The same day, at about 9 p.m. when the Police Public Relations Officer (PPRO) of the Command visited the Division, saw the boy and queried what a child of that age was doing at the police station at such a time”.

“PPRO was informed that Asuquo was a missing child, found and brought to the station,“ he added.

The commissioner stated that the PPRO demanded that the child be brought to the Public Relations Department at the police headquarters the next day while efforts were made to locate the parents.

“It is heartwarming to state that on Tuesday, at about 3 p.m., the police located the mother of the child, Miss Comfort Elijah of Nung Ette, Ibesikpo Asutan Local Government Area.’’

The Commissioner urged parents to give priority to the security of their children.