Inside Buhari's Presidential Villa Of Scuffles


There have been some ripples over the reported scuffle between Aisha Buhari and the Daura family. 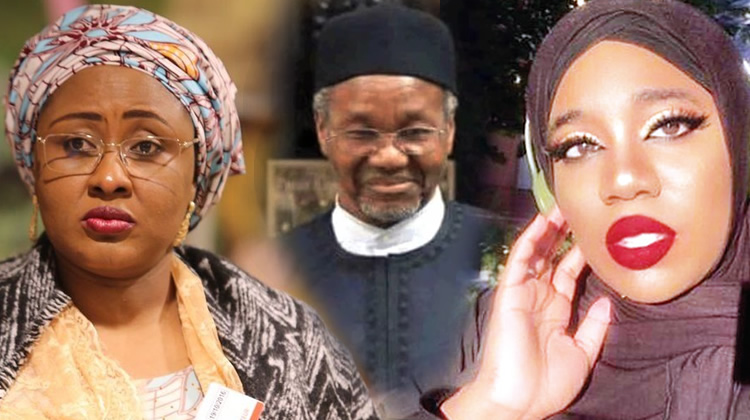 The relatively peaceful and tranquil atmosphere of the Presidential Villa is being threatened by internal conflicts amongst its occupants, OLALEKAN ADETAYO reports

The Presidential Villa, Abuja serves as the office and residence of both the President and Vice President of Nigeria. These two top government officials live in the ‘Aso Rock Villa,’ as it is popularly known, with their families, aides and security agents assigned to the villa.

While some of the aides live in various buildings within the complex, others and their respective families live with the President and Vice President in their official residences.

As visitors scale through the security check at the gate and enter the premises, they will be facing the President’s official residence directly, with a water fountain welcoming them.

On the left hand side lays a building called the Glass House. Our correspondent learnt that the building was originally intended to serve as a temporary means of shelter for an outgoing President and his family, who are in the process of vacating their official residence in order to give room for renovation, ahead of his successor’s arrival.

Since the building cannot be left unoccupied for the better part of a President’s tenure of four or eight years, as the case may be, it is normal that it is put to use. Under former President Goodluck Jonathan, a number of political meetings were held inside that building in the night.

The same building was in the news on Monday for what many Nigerians now describe as a ‘presidential scuffle’.  It all started when the wife of the President, Mrs Aisha Buhari, who was away from the country for a while, based on her doctor’s advice, returned to Nigeria in the early hours of Sunday and indicated that she still needed some time to rest.

Those who expected her to retire quietly into the comfort of her room in the Villa were surprised to learn about a controversial interview she granted the Hausa Service of the British Broadcasting Corporation, in which she accused Fatima, daughter of her husband’s nephew, Mamman Daura, of laughing at her because President Muhammadu Buhari asked Daura and his family to vacate the Glass House for his son, Yusuf.

Believed to be one of the powerful men behind the throne in the Presidency,  Daura had been occupying the building with his family, In spite of the fact that he does not hold any public office.

Mrs Buhari had said, “I was the one in the video. Those people behind me were the security personnel assigned to protect me. But Mamman Daura’s daughter, Fatima, shot the video in the presence of security officials and everybody. She was laughing at me because my husband said they should vacate the place (Glass House) for my son.

“I wanted to pass through that door to go into a store, but they had locked the door.  I took an alternative route only to discover that the door was also locked.”

Fatima also granted the medium a separate interview, admitting that she recorded the video that went viral to provide proof for her parents and security officials about Mrs Buhari’s outburst during the encounter.

She said, “Her comments frightened me. She was hurling insults and shouting that she had never seen anything like it. I went back and took my (mobile) phone because if you went and said she acted the way she did, nobody would believe you (without evidence).

“She was making a lot of noise, saying she was being oppressed. I filmed the encounter to show our parents and security officials, in case something happens. From the way she was screaming, I even thought she would pick up something to hit us or something like that.”

Those who have been observing events in the Presidential Villa since the inception of this administration in 2015 will admit that Mrs Buhari is not afraid to speak up when the need arises and whenever she is opportune to do so.

What readily comes to mind, in this regard, is her 2016 interview with the BBC. She had threatened to withdraw her support for the President at the 2019 general elections unless he made an effort to shake up his cabinet. At the time, she claimed her husband did not know most of the top government officials he had appointed.

She had said, “The President does not know 45 out of 50 of the people he appointed. I don’t know them either, despite being his wife of 27 years. Some people are sitting down in their homes and folding their arms only to be invited to head a government agency or take up a ministerial job.”

Although Mrs Buhari refused to name those who had hijacked the government in the interview, many people looked in the direction of Daura and the Chief of Staff to the President, Abba Kyari. Both men are believed to be powerful forces behind the throne in the Presidency.

Two years down the line, the President’s wife again justified her statement, saying it was based on her sense of justice. She said the statement was not meant to be confrontational or a sign of disrespect.

In a message she sent to the 2017 Vanguard Awards where she was honoured as the Vanguard Personality of the Year 2017, Mrs Buhari said she was brought up to stand by the truth and that was how she had been living her life.

She explained that since Nigerians elected her husband, based on the trust and confidence they had in him, she felt the administration should serve the country  to the best of its ability.

She had said, “One of the reasons adduced for honouring me was the interview I granted, which some people saw as criticism of a government that I am part of.

“I need to state that my position was a reflection of my sense of justice. It was not meant to confront or disrespect the government. I was brought up to stand by the truth and this is how I have always been.

“As we are all aware, Nigerians elected this administration based on trust and the confidence they have in my husband. Therefore, I feel that we are here to serve Nigeria to the best of our ability.

“Let me use this opportunity to state that I support my husband in this call to service and will continue to do so.”

Mrs Buhari did not spare the ruling All Progressives Congress and its National Chairman, Adams Oshiomhole, in her outburst. In October 2018, ahead of the 2019 general elections, she publicly faulted the manner in which some of the ruling party’s primaries were conducted. She particularly took a swipe at Oshiomhole, whom she accused of allowing impunity under his watch.

In a series of messages posted on her Twitter handle, @aishambuhari, she regretted that Oshiomhole, despite his background as an activist, could allow such conduct under his leadership and called on Nigerians to rise against impunity.

Mrs Buhari wrote, “It is disheartening to note that some aspirants used their hard earned money to purchase nomination forms, got screened and cleared, and campaigned vigorously, yet found their names omitted on Election Day. These forms were bought at exorbitant prices.

“Many others contested and yet had their results delayed, fully aware that automatic tickets were given to other people.

“The All Progressives Congress, being a party whose cardinal principle is change and headed by a comrade/ activist whose main concern is for the common man, yet such impunity could take place under its watch.

“It is important for the people to rise against impunity and for voters to demand that aspirants be committed to the provision of basic amenities, such as potable drinking water, basic health care (Primary Health Care centres)

“Given this development, one will not hesitate than dissociate from such unfairness, be neutral and speak for the voiceless.”

Reacting to the development in the Presidential Villa, a Senior Research Fellow in the Institute for Peace and Conflict Resolution, Abuja, Dr Olalekan Babatunde, in an interview with our correspondent, described it as an indication that nobody, no matter how highly placed, is precluded from conflict or misunderstanding.

He said, “The ongoing family crisis in the ‘First Residence’ of the country did not come to most Nigerians as a surprise. In fact the First Lady has on several occasions informed the public about the existence of a cabal in the Presidency. Secondly, beside the fact that the video trending on the social media did not attract a single comment from the administration, the First Lady confirmed it as soon as she arrived from Britain.

“As a conflict researcher, it shows that no one is precluded from conflict or misunderstanding of any kind. The rich also cry. The family crisis also reflects the very nature and characteristics of African extended families. You cannot live without them, more so, when you are rich, in high place or well connected.

“However, what is undesirable is the knowledge or awareness of the conflict in the public domain. Nigerians now know that the Villa is occupied by multiple families, who they are feeding and caring for. Maybe that is why the Villa’s annual budget is always high.

“It is important to resolve the family conflict for the sake of Nigeria and its international image. All concerned, especially those who are close to and have access to the family, must come to the aid of the parties to the conflict, regardless of their status, and put it to rest. Nigeria needs peace on every side.”

Also, a former Director, Department of State Services, Mike Ejiofor, in an interview with our correspondent, described the scuffles being experienced in the Presidential Villa as unfortunate. The security expert warned that such a  development was capable of distracting President Buhari from governance.

He said, “It is quite unfortunate that the development could be allowed to degenerate into an exchange of words between the President’s wife and Mamman Daura’s daughter. We agree with the fact that the President has his private life to live, but if he is distracted, it will affect governance. That is the implication of this altercation, which is an embarrassment.

“It is quite unfortunate. Both parties should be cautioned to stop further altercation in public and amicably resolve whatever dispute they have in-house.”