So Touching: You Should Read This About Dead Boxer, Patrick Day


The fight left Day unconscious and with ringside medical staff racing to his aid in transporting him to Northwestern Memorial Hospital. 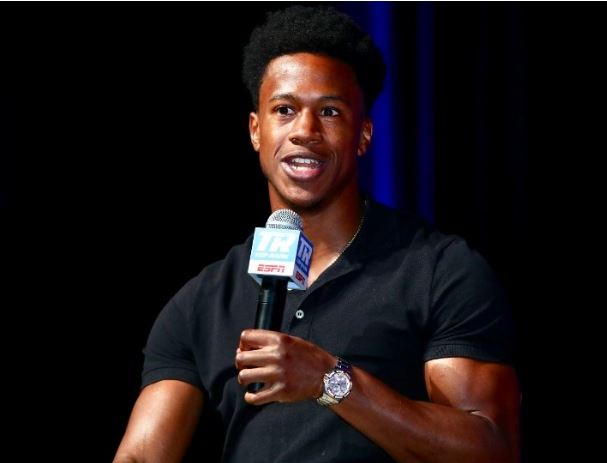 The escape plan was set the moment Patrick Day was able to leave the hospital and return home - put his college degree to good use, and leave behind a sport that always needed him far more than he ever needed to be a part of it.

Instead, the story ends in heartbreak, as Day—the kindest of souls—was inexplicably claimed by a sport that never loved him back.

Day, 27, passed away Wednesday afternoon from injuries sustained four day prior in the final fight of his pro career, a 10th round knockout loss versus unbeaten prospect Charles Conwell in their non-title fight Saturday evening in Chicago, Illinois.

The fight left Day unconscious and with ringside medical staff racing to his aid in transporting him to Northwestern Memorial Hospital, near the Wintrust Arena where Saturday’s card was held. Emergency brain surgery was performed, with Day falling into a coma from which he never recovered.

“Of all the kids, Pat was the one who didn’t need to fight,” Lou DiBella, Day’s career-long promoter told BoxingScene.com. “Great accomplished family, college guy, great looking… had so much promise outside of boxing.

Day (17-4-1, 6KOs) took the sport as a teenager, only after not making his high school basketball team. He trained out of his hometown PAL (Police Athletic League) gym in the Freeport section of Long Island, New York. A natural athlete—and quite frankly, quickly adaptable to anything he put his mind to—Day immediately took the sport, with accolades soon to follow.

A brilliant amateur career ended with a 75-5 record, a run which included two National amateur championships along with the distinction of being recognized as the number-one ranked boxer in the United States in the 152-pound division. His run in the paid ranks ended with his serving as a 2012 U.S. Olympic alternate to Errol Spence Jr., now a unified welterweight titlist.

It all paled in comparison to the diploma he obtained, earning an associate’s degree in nutrition from Nassau Community College in nearby Garden City.

Still, he came this far along in boxing, so it only made sense to give it a run in the pro ranks.

Mixed results came of his career, although reaching another milestone as he continued his higher education. Day received a bachelor’s degree in health and wellness from Kaplan University (now known as Purdue University Global).

Outside the ring, Day remains forever known for his radiant personality perfectly complemented by his humble nature.

“I’m just torn up about (Day’s passing,” Jamel Herring, the reigning 130-pound titlist and fellow Long Islander who served as team captain of the 2012 U.S. Olympic team told BoxingScene.com. “I was really hoping he’d pull through. It just hurts even more when it happens to someone you personally know from back home.

“I just want to send my condolences to his entire family through this hard time. Long Island lost a good man.”

Between the ropes, he emerged as a local favorite, particularly on DiBella’s Broadway Boxing circuit in New York and throughout the northeast. His first taste at the big time ended with a narrow loss to Alantez Fox in their Showtime-televised clash of then-unbeaten prospects in Jan. 2015.

Eight of nine wins would follow, a shocking 1st round stoppage loss quickly left in the rearview mirror following back-to-back impressive wins over then-unbeaten Eric Walker in front of his local fans at nearby Nassau Coliseum in July 2017 and a 10-round shutout of Kyrone Davis eight months later in Brooklyn.

A competitive but clear points win over then-unbeaten Ismael Iliev came this past February, his final in-ring victory.  A 10-round defeat to Carlos Adames in June left a bad taste in his mouth, enough to where Day refused to drop in competition level and eager to return to the ring and his winning ways.

It led to his showdown with Conwell, an unbeaten rising junior middleweight prospect from Cleveland, Ohio who served on the 2016 U.S. Olympic boxing team which competed in Rio. Their bout was due to take place Oct. 5 in New York City, only to get pushed back one week later and deep on the undercard of a DAZN telecast in Chicago, topped by Oleksandr Usyk’s stoppage win over Chazz Witherspoon in his heavyweight debut.

Conwell (11-0, 8KOs) scored knockdowns in rounds four, eight and 10, the last of the three forcing Day’s head to crash against the canvas where he remained for several minutes while undergoing immediate medical care before being strapped to a gurney and rushed to the hospital.

The fight was the first of seven to air live on DAZN that evening, though undoubtedly setting a somber tone long before the end of the telecast.

“DAZN is incredibly saddened to learn about the passing of Patrick Day,” read a statement from the press office of the Over The Top (OTT) media service. “Our heartfelt thoughts are with his family and friends during this difficult time.”

Even in the immediate seconds following the end of the bout, Conwell refused to celebrate what is currently the biggest win of his young career. His thoughts were immediately with his in-ring opponent, remaining so in the aftermath.

“I never meant for this to happen to you. All I ever wanted to do was win,” Conwell offered in a heartfelt open letter submitted through his verified social media channels on Tuesday, as the boxing world continued to pray for Day’s recovery. “If I could take it all back I would no one deserves for this to happen to them. I replay the fight over and over in my head thinking what if this never happened and why did it happen to you. I can’t stop thinking about it myself I prayed for you so many times and [shed] so many tears because I couldn’t even imagine how my family and friends would feel.

“I see you everywhere I go and all I hear is wonderful things about you. I thought about quitting boxing but I know that’s not what you would want I know that you were a fighter at heart so I decided not to but to fight and win a world title because that’s what you wanted and what I want so I’ll use you as motivation every day and make sure I always leave it all in the ring every time.”

The sentiment is shared throughout the boxing community, especially to those closest to Day and his family.

“It becomes very difficult to explain away or justify the dangers of boxing at a time like this,” rationalizes DiBella, who more than a decade ago had to endure the passing of former lightweight titlist Leavander Johnson. “This is not a time where edicts or pronouncements are appropriate, or the answers are readily available. It is, however, a time for a call to action. While we don't have the answers, we certainly know many of the questions, have the means to answer them, and have the opportunity to respond responsibly and accordingly and make boxing safer for all who participate.

“This is a way we can honor the legacy of Pat Day. Many people live much longer than Patrick's 27 years, wondering if they made a difference or positively affected their world. This was not the case for Patrick Day when he left us. Rest in peace and power, Pat, with the angels.”