Flooding: We Need Noah's Ark In Lagos, But Who Will Build It?


Natural disasters are common occurrences across the world, no major city is totally immune to them in recent times. 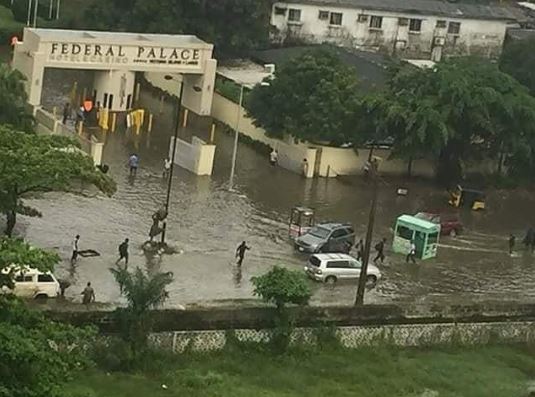 The flooded entrance of the popular Federal Palace Hotel, Lagos

I used to love the sounds of rainfall during my days in Ibadan, Oyo State where I grew up. I enjoyed how it beats the roof of my house and the windows. The impact of the rains on the streets of Jericho was beautiful. It had a way of washing the streets clean and bathing the green plants and trees that dance to the tune of the accompanying breeze after the exercise. My best periods of rainfall were the weekends. Mostly I would wrap myself under the duvet on my bed, partially close the windows, start watching a movie and simultaneously fiddle with my mobile phone. Luckily for me, the power company would mostly keep the lights on as far as the wind wasn't strong enough to cause much obstruction or damage.

But all these changed when I relocated to Lagos for economic reasons. The rains became unwanted visitors that could either enter your apartment through the door, under the ground or the roof. This is a major challenge that never respected the economic class of residents. The recent October 12 (Saturday) rainfall alone hit the highbrow Island area of Lagos so hard that a young man swam from his house to see his friend who lived close to him. This was caught on camera and the video was uploaded on social media. As usual, Nigerians by nature love humour. We enjoy trivializing all issues, we laugh them off, talk plenty and wait for the next trending issue we would use to while away time. We even commit disasters in the 'hands of God' like He is our project manager that needs no budget to embark on operations; then it happens again and possibly in a more severe fashion. I believe the Lagos State government must be tired of writing fresh press statements in the event of flooding. It could as well repost previous ones and adjust the dates because the circumstances are apparently the same.

Natural disasters are common occurrences across the world, no major city is totally immune to them in recent times. Most developed countries have continued to hold profound conversations about climate change even though a leader like President Donald Trump believes it's a hoax.

We have read about incidents of earthquakes in Asia, typhoons, hurricanes, heat waves, mudslides and torrential rains tearing up major cities and the rural areas. Majority of the environmental conditions affecting Lagos State are easily avoidable. The drainage systems in the city are conspicuously ineffective. You don't need to look too close to realize that they lead nowhere. They are clogged and some 'smart Lagosians' use the gutters as refuse disposal systems in the event of rainfall. When the water can't flow, it finds spaces in the houses of the residents and they start to cry foul. The government in the occurrence of flooding pretends like it's working to allow the issue to die down and then moves on like nothing ever happened. So it happens again in future like a ritual. Commonly, committees whose members might never convene are set up to tackle the challenge.

What if I tell you an apparent 'river' which is big enough to accommodate a baby mermaid or a crocodile has surfaced at the Community Road area of Ago Palace Way where I stay for the past two to three months and everybody is acting as if it's not an anomaly. A large portion of the road was constructed with no drainage facility. This has not only affected movement around the area but has also crippled businesses. Influential figures in Nigeria drive through that road every day and they cover their faces with newspapers seated at the passengers' seat while they leave the challenge of vehicular movement in their hands of their chauffeurs. The incident will never be newsworthy until it claims the lives of people and then everybody becomes sympathetic about the incident all of a sudden.

The challenge of flooding might persist to eternity especially at the Island area of Lagos where the sea is being suppressed to create more lands for human occupation. For example, the Eko Atlantic is recovering thousands of acres of land lost to sea erosion by building on sands dredged from the ocean floor. As at 2014, Lagos had reclaimed 5 million square metres of land from the sea and has built a strong wall to hold off the waters. The truth of the matter is that those areas are volatile and the sea levels have been rising in recent times.

The bitter truth is that 'Lagos isn't working'. Transforming Lagos from a megacity to a smart city like the immediate past governor Akinwunmi Ambode fantasized about is a farce and mirage. Residents regardless of the sizes of their pockets groan and moan about life in the metropolitan city. The roads are so bad that the potholes could abort a woman's pregnancy while commuting. Ridiculously, a busty Lagos socialite, Latasha Ngwube once complained that the dilapidated roads in Lagos left her breasts shaking and almost damaged her bra.

People die on these roads like the ill-fated promising Chartered Accountant, Adewura Bello who was swallowed by a manhole. Much of our productive time is spent in traffic and cars hardly last due to the accumulated effects of bad roads. Major parts of the city are not only dirty, but they also stink. You pay astronomical amounts of money for rents and maximum satisfaction is never guaranteed. You end up in being lost in the paper chase in your quest for comfort till you realize your hairs have become grey, skin wrinkled, the body is weak and your retirement day is close, so you pass the baton to your children to continue from where you stopped.

Majority of the jobs are provided by mushroom companies who have little or no regard for their employees. They can't even guarantee them of the least decent career paths. Everyone is being preyed on here and there. Tensions are high and people throng the burgeoning beer parlours in the pursuit of phantom alternative reality.

The international community rates the financial hub of Nigeria so low. In September this year, Lagos was  ranked as one of the worst places to live in the world for the third year by the 2019 Global Liveability Index by the Economist Intelligence Unit. Lagos’ general rating stands at 38.5 per cent - 20 per cent on stability, 37.5 per cent on healthcare, 53.5 per cent on .environment, 33.3 on education and 46.4 per cent on Infrastructure. Lagos ranked 139 which is the pride of Nigeria was just a step ahead of Damascus (140) in war-torn Syria which is ranked as the worst city to live in anywhere in the world. With these poor records, one might be forced to ask Asiwaju Bola Ahmed Tinubu and his All Progressives Congress colleagues to roll out the hidden Lagos 'Master Plan' which Ambode flouted to warrant his political annihilation.

Governor Babajide Sanwo-olu recently declared a state of emergency on Lagos roads and mapped out about 116 locations that will be inspected and repaired by the Lagos State Public Works Corporation in conjunction with some engineering firms. It appears to be a good step in the right direction and I hope the declaration wasn't a dummy move to boost the public perception of him. With the current dire state of affairs in Lagos, we fight need a 'Rage Cage or Anger Room' where residents can ease their minds by destroying objects as we have in China and America. Psychologists believe it's helpful and our local entrepreneurs could consider it an option for investment purposes. You would be shocked to see the governor in attendance as he may have some sort of frustration to expel.

With most streets at Ago Palace Way still ridden with flood days after rainfall, I fear the untold hardship another one might inflict on residents severely starved of adequate infrastructural facilities. Residents might need the ingenious efforts of selfless carpenters to build an ark to keep them safe as the days of the biblical Noah.


Osayimwen Osahon George is a journalist and a PhD student at the University of Ibadan. He can be reached via his email; [email protected]
Top Stories