Abdulrasheed Maina has lost 23 properties after a court ordered its forfeiture to the FG. 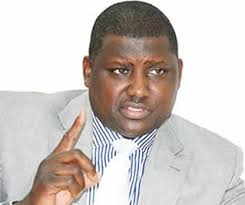 Abdulrasheed Maina
A Federal High Court in Abuja has ordered the temporary forfeiture of 23 properties linked to a former Chairman of Pension Reform Task Team (PRTT), Mr Abdulrasheed Maina, according to a report by Channels Television.
The trial judge, Justice Folashade Ogunbanjo, gave the order on Tuesday while ruling on a motion filed by the Economic and Financial Crimes Commission (EFCC).
In the suit, the anti-graft agency urged the court to order the temporary forfeiture of the properties linked to Maina
It also sought an order of the court to publish an advert on the properties in a national daily, to enable anyone who has any reason why they should not be finally forfeited to the Federal Government to come forward and prove same.
The EFCC supported its motion by a 30-paragraph affidavit which it brought pursuant to Section 17 of the Money Laundering Act.
Delivering her ruling on the motion, Justice Ogunbanjo granted the prayers of the anti-graft agency.
She also ordered the EFCC to return to the court on November 19, for the mentioning of the case.
Top Stories