NANBox Office provides a mind-blowing review of Nollywood film, 'The Enemy I Know' starring Regina Daniels and other top stars. 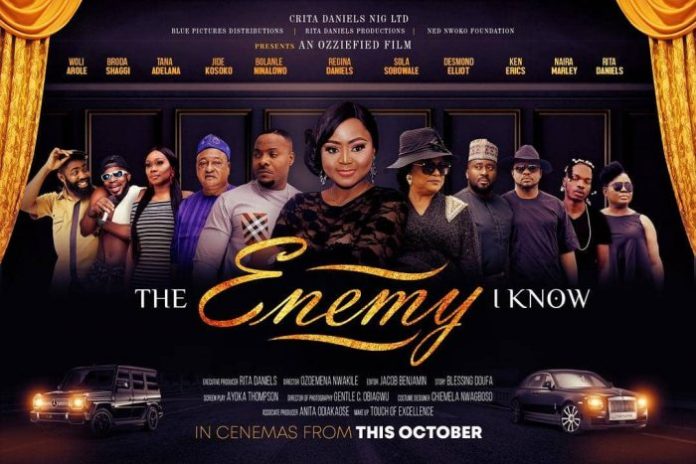 True to its name, “The Enemy I know”, Nollywood’s blockbuster presents the intrigues, conspiracy and scheming against its lead character, Regina Daniels, who stars as Zara in the movie.

NANBox OfficeReview, x-rays the star-studded thriller, its cast and crew, filming, locations, as well as the story line for the amusement of curious movie enthusiasts and industry watchers.

“The Enemy I know’’ is directed by Ozoemena Nwakile and produced by Rita Daniels, mother of Nollywood fast-rising actress, Regina Daniels.

Set in the Federal Capital Territory (FCT) “The Enemy I know” is a dramatic tale of billionaire Anthony Adewale (Jide Kosoko), who dies under suspicious circumstance, resulting in scramble for his wealth by every member of his family.

From its plots to role interpretation by the characters, sound and cinematography, as well as choice of location, the movie attracts amazing nods but not without some knocks.

Regina Daniels, who plays the lead role of Zara, the heir apparent to Anthony Adewale’s business empire, deserves some accolades for an amazing articulation and interpretation of the role.

The 20-year-old billionaire’s wife perfectly displayed composure, dexterity and brilliance of 25-year-old Zara, who is faced with the challenge of managing the business of her ailing father, amid intruding marriage proposal by her boyfriend, Richard.

Award-winning actor, Ken Erics, dazzles in his lover-boy role as Richard, a very `loyal’ lover, who makes marriage proposals to Zara three times and it is turned down.

Perhaps the most unusual display of affection and strong will by Richard was when he pays for all tickets to a Cinema, just to be alone with his heartthrob, and have “will you marry me” pop up the screen of the Cinema.

Zara, however, dashes his high hope, saying “I am not ready for your marriage proposal, let the relationship be as it is, I am not ready to be a wife or mother”.

Veteran actress Sola Sobowale, appears on top of her game in her role as the ‘known mother’ of Zara, who is the number one ‘Enemy She Knows’.

She actually connives with her ‘lover-boy’ Damian (Desmond Elliot) to kill her husband and thereafter prepared poisoned tea for her daughter, Zara.

Perhaps, Susan (Rita Daniels), the passionate maid and ‘unknown biological mother’ of Zara in the film, is the real heroine for her smartness, patience and sacrifices in exposing the “familiar enemies” to Zara.

A hilarious high point was when Zara slapped Susan , which she regretted later and apologised on discovering that Susan is her real mother.

Jide Kosoko, known for his natural veracity in character interpretation, is outstanding in playing the role of the poisoned Adewale on his sick bed.

The amazing sound and lightning of the film are clear indication that Nollywood films in recent times have evolved to hold their own on the global stage.

In all, the “The Enemy I know’ is a well conceived and well delivered story, and is acclaimed to be viewers’ delight from the stable of Rita Daniels Productions.

However, the movie attracts some knocks as well from the NANBox Office.

Ken Erics (Richard) did not show the expected overt trauma and grief of someone who just lost a loved one, when he is told of Zara’s death.

The reappearance of Zara in the Adewale mansion after her ‘feigned death’  is characterised with ‘lightnings and shaking’ that makes everyone believe she is a ghost, which further raises the common ‘ghost myth’ in some Nollywood movies.

The locations are mostly limited to ‘office- home-and- office’, which is a bit monotonous, without exploring the fantastic gardens, parks and edifices that abound in Abuja, as  choice shooting location for modern filmmakers.

However, “The Enemy I know” is a persuasive and thrilling story of love, betrayal and conspiracy that reasserts the saying that “A man’s enemies are those of his household”.