The INEC National Commissioner said since the governorship election was still 31 days days away, it is possible to hold the two polls together. 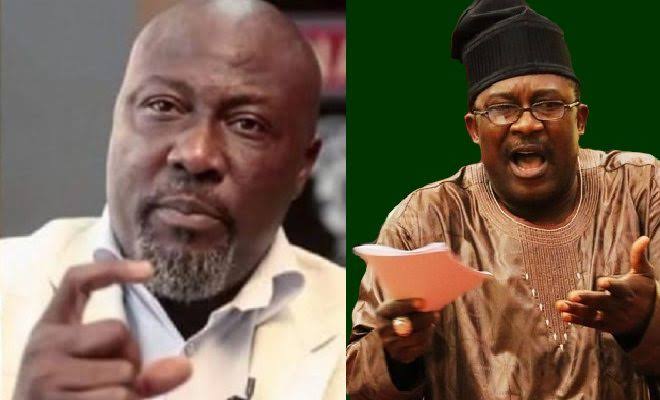 Kogi West Senatorial District is back to square one. The district is warming up for a fresh senatorial election, following the nullification of the precious poll by the Appeal Court. The contest is between Senator Dino Melaye of the Peoples Democratic Party (PDP) and Senator Smart Adeyemi of the All Progressives Congress (APC). Who wins? Correspondent JAMES AZANIA asks.

With the affirmation of the ruling of the Kogi State National/State Assembly Election Petitions tribunal, invalidating the election of Dino Melaye as the senator representing Kogi West at the National Assembly, by the Court of Appeal, Abuja, a fresh poll will hold in the district on November 16. The game of supremacy between Senator Dino Melaye and Senator Smart Adeyemi will assume a new dimension.

The Court of Appeal ruled that the verdict of the National/State Assembly Election Petitions Tribunal in the state, that the Peoples Democratic Party (PDP) candidate (Senator Melaye) in the February 23, 2019 polls was not validly elected. It ordered a fresh election within 90 days.

Adeyemi, a former two-term senator under the PDP, was beaten at the last general election by Melaye, who had just defected from the PDP to the opposition All Progressives Congress (APC). The latter is a former members of the House of Representatives from (Ijumu/Kabba/Bunu constituency).

Melaye in a controversial circumstance, picked the APC ticket to contest in 2015, a feat he repeated at the last National Assembly Election, but which has now been invalidated.

The two senators have dug at each another, as their political interests have often clashed.

Following the invalidation of the Kogi West election, and the removal of the only PDP senator from Kogi State, the battle will not only be a straight one between Melaye and Adeyemi, but also between Melaye and Governor Yahaya Bello.

Not only is Bello, who has a score to settle with Melaye, seeking to return to the Lugard House in the November 16 poll, being the candidate of the ruling party, the fact that the governership election and the Kogi West Senate rerunwill hold on the same day makes it a big battle for supremacy.

“It is going to be a political battle that will settle the contest between Bello/Senator Adeyemi and their common foe and Dino, who is a former ally of the governor. We all know that the governor and Dino have parted ways long ago, but the Senate election ordered by the court is basically going to be a Kogi West affair. Let us wait and see how it will go,” said a politician who did not want his name in print, from the area.

The Independent National Electoral Commission (INEC) had said that it will explore the possibility of using the November 16 governorship election to conduct the fresh election for the Kogi West Senatorial District.

The INEC National Commissioner said since the governorship election was still 31 days days away, it is possible to hold the two polls together.

The petition filed by Adeyemi, candidate of the All Progressives Congress in the February 26 election, paved the way for the rerun and the opportunity for either Adeyemi and all those that want Melaye out of the Senate, have their day, or for Melaye to proof his resilence, in the political firmament of Kogi State, and Kogi West particularly.

The three-man panel of the Court of Appeal, led by Justice A.O. Chijioke, in its majority decision, upheld the arguments by Adeyemi’s lawyer, Dapo Otitoju, to the effect that the election was flawed.

Otitoju, in his final submission on July 23, prayed the court to nullify Melaye’s election on three grounds; arguing that the INEC’s decision to collate and announce the election results in Lokoja, despite the judgment of the Federal High Court, identifying Kabba as the headquarters of the senatorial district, was a negation of the constitution and Electoral Acts. It was substantial ground to nullify the election.

He argued that the INEC’s failure to abide by the judgment of the Federal High Court, which it did not appeal, showed that it had a hidden agenda.

Counsel argued that the presentation of the certified true copy of PVC distribution in Kogi West, which revealed 48,200 excess votes in the result declared for the senatorial district, was enough reason for the tribunal to nullify the election.

He urged the tribunal to take note of the mutilation of votes that was visible in the result sheets. He said the mutilation was occasioned by the INEC’s change of the venue of collation centres, and prayed the tribunal to void the election on the grounds that it was held in substantial non-compliance with the constitution, the Electoral Act and against the wishes of the people who voted.

Melaye’s counsel, Prof. Joash Amupitan (SAN), called on the tribunal to dismiss the petitioner’s prayer, saying that the documents presented by him were “mere hearsay documents.”

He urged the court to hold that his client was validly elected. The case, however, did not favour Melaye.

The ousted senator said he was not worried by the verdict, which he described as human judgment.

“It is absolutely well. No worries, no tension, no pains. I celebrate God for He is always a good God. I believe in the divine, I mean God’s judgment. I ask my supporters to be law-abiding as we shall always overcome. To God be the Glory,” he said.

Adeyemi, however, expressed confidence of winning Melaye in the Senate rerun, saying, “I am not afraid of poll rerun with Senator Melaye. He cannot defeat me in a free and fair election. He is no match any day. It is now obvious that he did not defeat me at the last poll.

“Dino Melaye has never won an election before. I thank God we have judges with a high level of integrity because the facts before them spoke for themselves. You don’t have to be a judge to see that the results were manipulated.”

He added: “It is a different ball game now in the Kogi West Senatorial District. The masses have seen the difference between my performance in office and that of Dino who did nothing for our people.The political scenario has changed completely. More than half of the foot soldiers of the Peoples Democratic Party in Kogi West have defected to the All Progressives Congress .

“He cannot account for his stewardship in the Senate; he has nothing to show for it to the electorate.”

Bello welcomed the court’s decision, describing it as a clear attestation that the judiciary was solidly on course and working in line with the aspirations of the people.

He said it is a vindication of his earlier position that the PDP manipulated Melaye’s election.

The governor, in a statement by his Chief Press Secretary, Onogwu Muhammed, said: ”For upholding the petition by Senator Smart Adeyemi of the All Progressives Congress and ordering that a fresh election be conducted by the Independent National Electoral Commission in the constituency, the tribunal and the Appeal Court have jointly proved to the world that the people’s mandate was stolen in the last Kogi West Senatorial election.

“The Appeal Court and the entire judiciary, therefore deserve our commendation for further strengthening the democratic and electioneering processes in Nigeria.” Bello said he was confident the people of the Kogi West will turn out enmass to elect Adeyemi of the APC in the re-run election.