NADECO Not Formed Because Of June 12 – Osoba


Former Governor of Ogun State, Chief Olusegun Osoba said the National Democratic Coalition was not formed because of the June 12, 1993 election annulment. 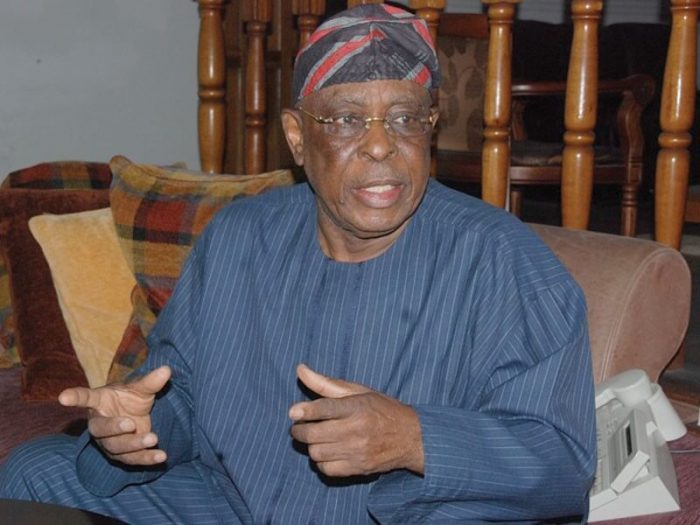 A former governor of Ogun State, Chief Olusegun Osoba, on Tuesday said  the National Democratic Coalition was not formed because of the June 12, 1993  election annulment.

Osoba said this in Lagos at the presentation of a book, Makers of Nigerian Press, written by  a veteran journalist, Chief Dayo Duyile.

He said, “When the master of ceremonies  was talking about Ndubuisi Kanu, people don’t know that he was part of the people that started the NADECO struggle.

We did not form NADECO for June 12; we formed it for the military to get out of power. I invited Chief MKO Abiola to join NADECO when he came back from South Africa after the inauguration of Nelson Mandela.

It was when he agreed to NADECO philosophy that he was admitted into the group.”

The All Progressives Congress chief  saluted Duyile for the book which he said would be a reference point for journalism students and practising journalists.

He said, “Journalists don’t tend to celebrate themselves; they dedicate so much time to celebrate others. Duyile got to the peak of his journalism career before going into the academics. We need to put the record straight.”

Also, the first civilian governor of Lagos State, Alhaji Lateef Jakande, expressed concern over the “terrible” state  of roads in the state, appealing to the state government  to fix them.

He said, “The current state of Lagos road is terrible and a serious matter and the current administration needs to do something about it.
As a citizen, we must be conscious and determined to do the needful for the state to progress. So far successive  administrations after me have  done well, but there is always room for improvement.”

Duyile said the idea to write a historical account of notable contributors to the growth of the press in Nigeria was conceived when he was the Editor-in-Chief and acting General Manager of Sketch Publishing Company Limited from 1977 to 1978.

He said, “The publication of this book arose from my desire to produce a book on the evolution of the Nigerian press for educational needs, reading pleasure and for use for research works by scholars.”
Top Stories