Security operatives have apprehended some pregnant teenagers at a hotel in Ogun state. 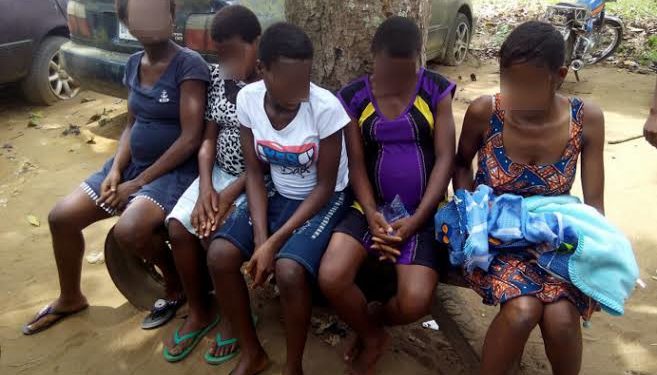 Pregnant teenagers found at a brothel (Photo: TheNation)
A brothel where underage girls are camped and sexually exploited has been uncovered by detectives attached to the Federal Criminal Investigation and Intelligence Department (FCIID) Alagbon in Ikoyi, a report by TheNation has revealed.
The place known as Dafog Hotel in Shimawa, a Lagos-Ogun border community was discovered at the wee hours of Wednesday and 14 women, two men arrested.
Those arrested were the owner Gbenga Olayinka, his nephew Adekunle Oshineye, 28, three adult commercial sex workers- Happiness Daniel, Favour Nkume and Glory Ewelike- as well as nine underage girls.
The girls gave their names as Chisom Onyekwere, Chinonso Okoro, Stella Emmanuel, Gift Wada, Chidinma Emmanuel, Tracy Favour, Success Onu, Comfort Francis, Njoku Divine, Destiny Chibuike and Amanda Chima.
The Nation reports that the girls were brought from Akwa Ibom, Kogi, Enugu and Imo States and were made to sleep with a minimum of four men daily at a fee ranging between N500 and N1,000 per client.
Some of the girls who spoke to reporters said they usually paid their boss N1,000 daily for the accommodation, claiming that their friends who were already staying there came to their respective villages to lure them.
Aside from making them sleep with men for money, it was gathered that the men usually take turns on them whenever they felt like.
Our Correspondent observed that most of the girls could not spell their names correctly, a development attributed to their drop out of primary school. It was also observed that none of them knew they were at risk of contracting Hepatitis B and C or Human Papillomavirus (HPV), the virus that causes cervical cancer through their sexual behaviours.
Explaining how the place was discovered, Deputy Superintendent of Police (DSP) Cordelia Nwawe said her boss Assistant Inspector General of Police (AIG) Usman Mani received intelligence about a baby factory in Shimawa on Tuesday night.
“The anti-trafficking team immediately moved to the location and throughout the night till about 10am on Wednesday, October 23, we were on operation in the area. We needed to locate that particular baby factory where underage females are kept.
“They carried out extensive investigation and found out that 16 females were housed there and engaged as sex workers.
“These girls engage men from the underworld and give them information on potential targets. They are used for high menace back in this country. Also note that weapons are usually hidden in places like this and so, the FCIID is out to carry out extensive investigation.
“The AIG FCIID has stressed that the police will not allow women to be moved to Lagos or any city in the country and turned into sex workers,” she said.
But Olayinka denied the place was a baby factory, adding that he never knew some of the girls were underage. He said he usually asked them their age and they would tell him they were 20 years and above.
According to Olayinka, he has owned the 20-room brothel for two years insisting that the girls usually came by themselves to rent rooms.
“I have never forced anyone to stay. The place is a hotel and I charge the girls N1,000 daily. I do not control them on their customers and I do not keep their money for them. I don’t ask them for identity cards when they come in. I just ask their names, age and where they came from which I usually wrote in my book.
“Police have been coming there to search but they have never found anything incriminating. It is not true that criminals come there to hide and it is also not true that the girls keep weapons for criminals. Nothing like that happens there.
“My offence is that I kept these girls in my care to use them to work and I am sorry about that. I know it is wrong. I am married with four kids, two girls and two boys.”
Oshineye who claimed to be a builder said he usually went to the brothel to assist his uncle whenever he didn’t have a job to do.
He said he was arrested in one of the girl’s rooms while having his shower after a time out, claiming the girl was his lover.
“They saw me inside one of the girls’ rooms. I was bathing. She is my girlfriend. We have been together for five months now. She does not pay for accommodation and she is no longer doing prostitution. She is currently learning hairdressing,” he told reporters.
However, his claim that the girl was no longer into prostitution was countered by the teenager who said she slept with four men daily, adding that it was the money she used to learn hairdressing.
“My boyfriend and I planned that I will stop prostitution by December because that is when I would complete my apprenticeship. I sleep with four or five men everyday. It was my friend who came to bring me from the village. I do not enjoy it but I do not have another option,” she said.
Okoro who claimed she was the second of six children, said she took to prostitution to support her widowed mother, adding that she has been able to send N7,000 to her since she began three months ago.
“I told my mum I was working but I did not tell her the job I was doing. I have been able to send only N7,000 to her since I started this work. I use protection each time to avoid getting infection.
Daniel who said she started her prostitution profession many years ago at Mile 12, told reporters she relocated to Dafog Hotel two-years-ago and had since remained there.
Top Stories

Unbelievable! Man Kills His Own Brother Over Money Raised For Their Mother's Funeral
Recent Stories