The National Chairman of the All Progressives Congress, Comrade Adams Oshiomhole, hails from Etsako West LGA. 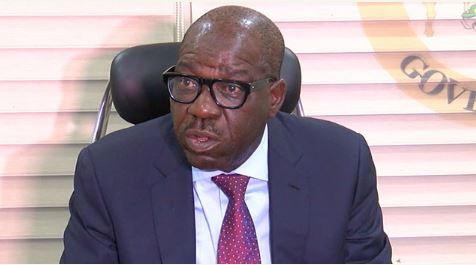 Edo State Governor, Mr. Godwin Obaseki has approved the removal of Mr. Yakubu Musa, erstwhile chairman of Etsako West Local Government over his alleged involvement in a N46m fraud in the council.

The National Chairman of the All Progressives Congress, Comrade Adams Oshiomhole, hails from Etsako West LGA.

Governor Obaseki, while swearing-in Osumah at Government House, in Benin City, yesterday, said that investigations by a panel constituted by the state government alleged that the former LG boss, Musa, was engaged in fraudulent activities and lacked the ability to supervise the staff of the Council.

He reiterated his administration’s zero-tolerance for corruption and negligence of duty.

“With the permission and authorisation of the Edo State House of Assembly (EDHA), we dropped Yakubu Musa for engaging in corrupt activities.

“He was dropped based on the investigation conducted following reports and observations at the monthly Joint Account Allocation Committee meetings I preside over,” the Governor explained.

Obaseki maintained that no matter the developmental efforts by the state government, the local government must perform their duties before the state can be highly rated in terms of development.