Travelling fans had a banner removed by Reds officials and the club are now seeking to identify those responsible for displaying the racist stereotype. 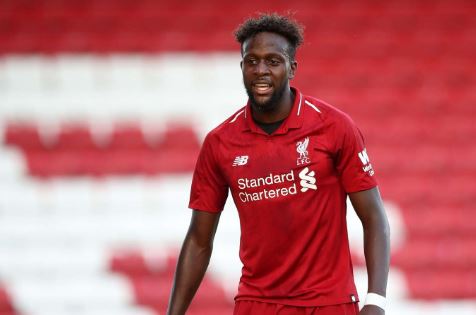 Liverpool have denounced a banner which had been displayed by fans depicting Reds forward Divock Origi with an abnormally large penis, a racist stereotype which the club have called “highly offensive and inappropriate”.

The banner was unfurled by away fans at the Luminus Arena ahead of Liverpool’s Champions League group stage clash with Genk, and was removed by club officials following an online backlash on social media.

A Liverpool statement read: "Liverpool Football Club condemns the offensive banner displayed in our section of the ground, prior to kick off.

"To be clear, the image used perpetuated a racist stereotype. This is completely unacceptable.

"We acted swiftly to have the banner removed and we are now working with the local authorities and stadium team in Genk to identify those responsible.

"Any subsequent action will be taken in keeping with our sanctions process."

The stereotype has its historical origins in the oppression of black men in America, an animalistic portrayal which was intended to show a sexual threat posed by African American men towards white women in particular.

Accusations of sexual violence or misconduct were historically used as a justification for the lynching of black men in America. One notorious example of such violence was that of Emmett Till, a 14-year-old African American kidnapped and murdered in 1955 after being accused of flirting with a white woman.

The origin of the stereotype isn’t widely known, and some fans opted to defend the banner on social media. It has been estimated that nearly 3,500 African American men were lynched in the USA between 1882 and 1968.

A second banner in the Liverpool away end read: “We are not racist. #LFC”

Origi became a cult hero at the club last season after scoring late goals in the Merseyside derby against Everton, and in the Champions League final against Tottenham.

Liverpool are in the spotlight at the moment after the 2011 incident between Luis Suarez and Patrice Evra returned to the headlines over the weekend.

Former vice-captain Jamie Carragher apologised for Liverpool’s decision to publicly support Suarez after he racially abused Patrice Evra eight years ago, but Evra’s team-mate at the time, Rio Ferdinand, has called on Liverpool to officially apologise for the incident.

"I Married Regina In 3 Weeks, She Knows I Will Marry Again" - Ned Nwoko Confesses In New Interview (Video)
Popular Stories