One Dead, Others Under Observation As Strange Illness Hits Ondo School


A strange illness has reportedly hit a school in Ondo state, leaving one person dead and others under observation. 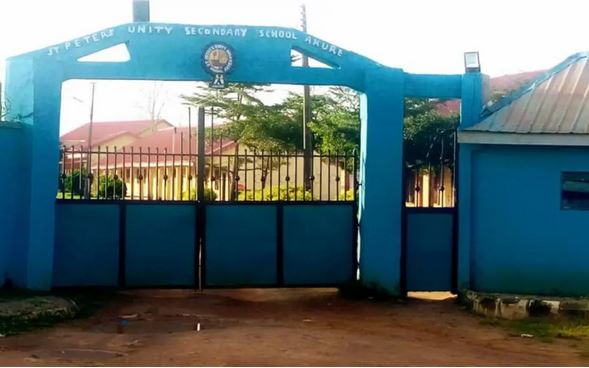 According to Daily Post, a student of St. Peters Unity Secondary School, Akure, SPUSSA, Ondo State has died due to the outbreak of a disease in the school suspected to be meningitis.

With the death of the JSS 1 student which occurred on Saturday, last week, two students who were in the same class with the deceased are currently battling with their lives at the State Specialist Hospital, Akure, the Ondo State capital.

It was gathered that the situation which is currently causing panic among students and teachers in the school which is being operated as a full boarding school by the Ondo State government is being suppressed by the school authority in order to avoid alerting and causing scare among parents.

According to one of the medical personnel at the hospital who spoke on the condition of anonymity disclosed that different tests are already ongoing to ascertain the particular disease they are battling with as she emphasized that the symptoms shown so far are similar to that of meningitis.

She maintained that the bacterial, meningitis, is usually contracted through unhygienic conditions and poor sanitation which she said the school is suspected to be prone to particularly in the school’s dormitory and kitchen.

While narrating how the students were rushed to the hospital, the medical personnel stated that “a male and female students were brought here (hospital) on Saturday.

“That very Saturday, the male student died as the doctors and nurses on duty were battling to save his life.

“Not quite long, another one (student) of the school was rush to the hospital showing the same symptoms with others. This was when the situation caused panic as it dawned on everyone that there must have been an outbreak of disease at the school.

“So, the State hospital decided to take precautions and isolate them in the children ward while restricting every visitation.”

Expressing displeasure over the situation, one of the parents of one of the affected students said that since he got a call from the school on Saturday as regards his son’s illness, no one has been able to tell him the particular illness his son was suffering from.

“I received a call from the school on Saturday that my child, who newly got admitted into the school is not feeling okay and was rushed down to the State hospital, hence I should show up.

“I got to the hospital, and I saw my son who on a normal day would happily run towards me lying on the sickbed.

“Since Saturday till today (Thursday), he has not been able to talk. He is just unconscious and nobody is explaining anything to us.

“Since then, the nurses set him and one other student aside in the hospital as they restricted our movement to him.

“When he was resuming into the school, I bought everything the school requested for, everything.”

Confirming the development, Commissioner for Health in the state, Dr. Wahab Adegbenro, stated that officials from the ministry have been to the school for necessary measures.

“The Ministry just got to know about it and we have taken measures to prevent and ensure it doesn’t spread to others.

“We have also isolated two of the students affected at the wards and they have also been placed under control and they would soon recover from it.

“I can say there is no cause for alarm or panicking as we have risen up to the challenge.

“As I speak, we have visited the school to ensure we fumigate everywhere in the dormitory and treated the other students.

“students who might have gotten close contact with these victims have been placed on drugs and also treated so as to avoid the spread of the disease.”