Thunder has struck as many as eight cows to death in a community in Ondo state, leaving many in a state of shock. 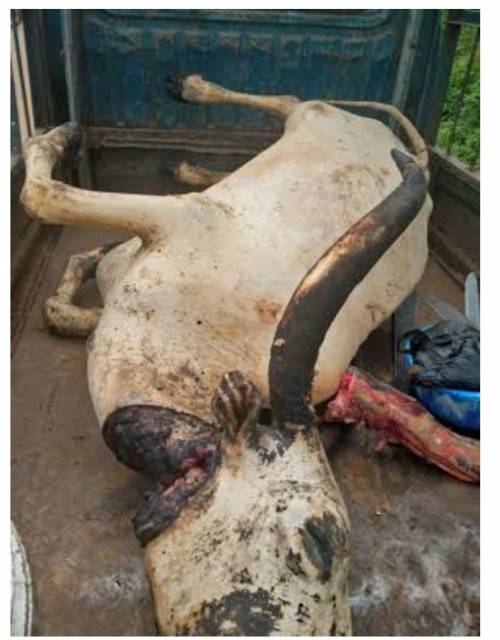 One of the affected cows

According to SaharaReporters, eight cows have been strucked to death by lightning at Ekan-Ile in Ikare, Akoko North-East Local Government Area of Ondo State.

It was gathered that the incident happened on Tuesday evening, causing panic among residents of the area.

This incident comes barely one month after over 32 cows were struck to death in similar circumstance at Ijare in Ifedore LGA of the state.

Already, some officials from the Ministry of Environment have moved to the site of the incident to prevent an outbreak of sickness following the strange occurrence.

A community leader, Pa Omola Adegoke, confirmed the incident to our correspondent on Wednesday.

He explained that the residents got wind of the incident shortly after two herdsmen started selling the cows to butchers in the Akoko area at a low price.

He said, "The incident occurred in Ikare on Tuesday and it was like the mysterious ones that occurred last month in Ijare.

"And to our dismay, we saw the owners (herdsmen) with a butcher planning to sell the cows to customers.

"We had to raise the alarm and call the attention of the government to the incident  to save us from epidemic."

Following the incident, the state government has banned the sale of unverified cow meat in the Ikare Akoko area.

Director of Environmental Health Services in Akoko North-East, Yemisi Adeniyi, confirmed the incident and hinted that the government had arrested some butchers in connection with the matter.

Adeniyi however, cautioned the people of Akoko to stay away from beef over the next few days to avoid consuming contaminated one.