Commotion As Nigerian Man Gets Murdered At Ex-Governor's Hotel


A Nigerian man has gotten murdered in an ex-governor's hotel at the Federal Capital Territory. 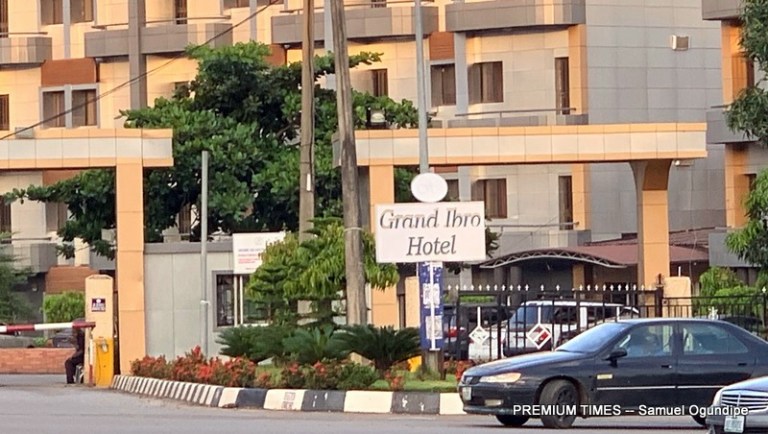 In the afternoon of October 5, Peace Wisdom Ewinchola, a 25-year-old worker at Grand Ibro Hotel in Abuja, reported for work. When he closed late at night, he decided to stay over in one of the rooms used by staff members at the hotel.

By the next morning, colleagues who searched for the worker found his body in Room 122 with his phone by his side, according to official mortuary entry seen by PREMIUM TIMES. The police subsequently ruled Mr Ewinchola’s death as a homicide.

The death has shocked staff at the hotel at Wuse Zone 5, just blocks away from at least three key federal government offices. But the handling of the tragedy by the management of the facility has caused even more alarm and terrified the hotel community amid allegations of an attempt to cover up the killing.

The questions begin with how Mr Ewinchola’s body arrived at the mortuary. PREMIUM TIMES learned the body was kept at the hotel for several hours without the police being informed. When the body eventually arrived the Wuse District Hospital at Zone 3 late at night on October 6, it was accompanied by the hotel’s chief security officer and a man who claimed to be a police inspector. There was no formal police report as is required for such deposits, PREMIUM TIMES learned.

Although there was no formal police entry, hospital officials admitted the body, fulfilled clinical examinations and transferred it to the morgue after all payments had been made.

Hospital workers told PREMIUM TIMES they did not suspect any wrongdoing until a police team arrived days later to make enquiries about the death. PREMIUM TIMES learned someone had alerted homicide detectives with information that Mr Ewinchola’s death was unnatural and the hotel’s handling of it was problematic.

Detectives subsequently found that Mr Ewinchola had indeed been taken to the hospital without a police report and that the purported officer who signed documents depositing his body was at large.

Internal police records said two officials of Grand Ibro Hotel were immediately taken into custody: Obaje Aroma, the human resources manager, and Ben Ekwona, a security supervisor. At the time of the arrests, the police said a manhunt had been intensified for Mr Onyido, the chief security officer. It was unclear when the human resources manager was released, but PREMIUM TIMES learnt that he was at work on Thursday morning.

Although the police have not officially declared Mr Ugbaje as a police impersonator, findings by PREMIUM TIMES indicate it would be difficult to track down whoever appeared as a police inspector with the hotel security chief to deposit Mr Ewinchola’s remains.

A review of the hospital’s record showed that the purported police officer listed fake telephone numbers in three separate entries of the hospital prior to the body being admitted.

The listing of three invalid numbers appeared deliberate and aimed at making it difficult, if not impossible, to trace the author, detectives told PREMIUM TIMES. Also, the police service number 203032 which the person provided at the hospital could not be traced by the police weeks later.

Even though the police said Mr Onyido was being sought for his role in moving the remains to the hospital, PREMIUM TIMES met him during visits to Grand Ibro Hotel on October 18.

During another visit on October 23, front desk staffers at the hotel said Mr Onyido stepped out shortly before this reporter arrived, an explanation he confirmed in a telephone call on the spot. Hotel and police sources told PREMIUM TIMES Mr Onyido was never arrested since the incident, even though he continued to report for work.

Three weeks after Mr Ewinchola’s murder at his workplace, PREMIUM TIMES has not been able to reach his loved ones, and it remained unclear whether they had learnt of his fate. The police and the hotel declined to comment on the case.

PREMIUM TIMES visited Grand Ibro Hotel on October 18 and met with Mr Onyido, who said he could not comment on the murder although he was the most-senior official available at the time of the visit.

Mr Onyido said the hotel’s general manager had been hospitalised and would not be discharged until Saturday evening, October 19.

Mr Onyido gave his words that he would call back later that Friday or sometime during the weekend, but failed to do so. Several calls to his telephone number between October 18 and 22 were not answered.

When PREMIUM TIMES visited on Monday, security men at the hotel said Mr Onyido was not at the hotel. During another visit on Wednesday, front desk officers said he stepped out “10 minutes ago.” He confirmed this during a telephone call placed to him at the reception.

During the telephone call, he insisted that he could not speak for the hotel and the general manager was still at the hospital. When asked for the contact of the general manager, he abruptly disconnected the call and declined eight subsequent calls to his line over several hours.

Abuja police commissioner, Bala Ciroma, told PREMIUM TIMES the matter was being investigated and insisted he would not go beyond that.

Officials at the Wuse hospital declined to give comments to PREMIUM TIMES. But some workers there told PREMIUM TIMES the body was accepted because it was accompanied by a man they thought was a police officer.

The police and Grand Ibro Hotel officials declined to say whether or not the family of Mr Ewinchola had been notified of his death, but hospital officials stated under anonymity that no one had visited the hospital as a family member for enquiries about his remains.

Some workers at the hotel who interacted with PREMIUM TIMES over the past week expressed fears about their safety. One staff said it was not the first time someone died in a suspicious manner. PREMIUM TIMES could not independently verify that claim.