One-Eyed Terror: Meet The Cult Kingpin Who Ordered The Death Of 15 People In Ogun (Photo)


A one-eyed terror kingpin who reportedly ordered the death of about 15 people in Ogun state has been nabbed. 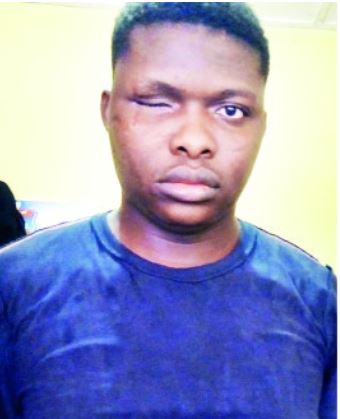 In Ikenne and Ago-Iwoye, two towns in Ogun State, terror has a name: Sunday Paul a.k.a. Blade. Mentioning his name is enough to put the fear of God in the minds of the inhabitants of these two communities who for the better part of a decade had lived in fear of the 25-year-old cult and robbery kingpin declared wanted five years ago by the Ogun State Police Command.

Paul, leader of the dreaded Eiye Confraternity, is a one-eyed ex-convict wanted for serial killings of not less than 15 students of Olabisi Onabanjo University, Ago-Iwoye and other victims in the Ikenne environs.

The suspect, arrested on September 21 by operatives of |Monitoring Unit, is presently in the custody of the State Criminal Investigation Department, Eleweran, Abeokuta, Ogun State. His arrest, Saturday Sun gathered, was at the instigation of the Vice President, Professor Yemi Osinbajo, an indigene of Ikenne, who had received complaints from his kinsmen on the bad act of Paul when he visited home a few weeks ago.

The suspect, long on the wanted list of the command, has been arrested and charged to court on three different occasions and had been remanded twice in Ijebu-Ode Prison. He had recently returned from prison over a murder case.

He gave a rundown of his criminal career: “I didn’t have any job. I started with Okada until I was initiated into Eiye Confraternity during Ojude-Oba festival. I was involved in several killings in Ago-Iwoye and Ikenne. On January 22, 2016, SARS operatives arrested me for the fourth time. I was arrested for murder and assault and remanded in Ijebu-Ode prison.

“I have had to renounce my membership of the cult group having been counselled by the former Commissioner of Police, Mr Ali Abdullah. I surrendered my three sophisticated weapons, pump-action and AK-47 rifles and cartridges, to the command.”

After his release in 2017, he behaved like a dog that went back to its vomit. He rejoined the Eiye cult –– “I had relocated to Ikenne where I continued with my group,” he admitted –– and was arrested again by SARS operatives for cultism and murder and remanded for the second time in Ijebu-Ode prison. On this occasion, he admitted that “I killed one Kabiru in Ago-Iwoye.”

He, however, claimed ignorance of other murders that rocked Ago Iwoye thereafter–– “I heard that members of Eiye Confraternity recently murdered a 300 Level student of the Olabisi Onabanjo University,Ago-Iwoye State in front of his house.”

Paul claimed he was a reformed man: “I have confessed to detectives that although I had been involved in several killings, I have stopped it (killing) before I was arrested in my house in Ikenne on September 21, 2019."

Relief after his arrest

His arrest had triggered widespread jubilation in Ago-Iwoye, Ikenne and nearby communities. Some members of the public could hardly believe that the notorious killer had eventually been arrested after years of terrorising the entire Ikenne and Ago-Iwoye residents with impunity.

One of the elders in Ikenne, Mr Segun Oloko confirmed that the arrest of Sunday Paul had caused wild jubilation.

“We are happy when the Monitoring Unit stormed Ikenne and arrested him,” he said. “The Ikenne community thanked the Vice President, Professor Yemi Osinbajo for rescuing us from this serial killer.”

Some of his victims had stormed the Ogun State Police Command to identify the suspect and to lodge various complaints.

Commander of the Monitoring Unit, Daramola told Saturday Sun: “We have started collating some cases which he has been involved in, at the Special Anti-Robbery Squad Unit, Police Divisional Headquarters Ikenne, Homicide Section, and at Anti Cultism.”

One of the cases hanging on his neck is the murder of Sodiq Odeyale, a 20-year-old student of Olabisi Onabanjo University who was allegedly killed in cold blood by members of Eiye cult on July 17, 2019, in front of his house in Ago-Iwoye.

Saturday Sun met the father of the victim, Mr Odeyale, at the police station. The bereaved father  lamented: “The only son I had was shot dead by Paul in front of his house. He was shot on July 17, and we have buried him. We were told that he [suspect] came with his gang and my son was shot dead. My son was not a cultist. It was when we heard that he was arrested by the Monitoring Unit that I came to the Ogun State Police Command to identify the killer responsible for my son’s death.”

Odeyale demanded justice, asking the Commissioner of Police to “look into this matter.”

Deputy Commissioner of Police, State Criminal Investigation Department, Eleweran, Mr Wale Abass stated that the arrest of Paul brought a huge relief to the residents of Ago Iwoye and Ikenne.

“We have started interrogating him and he has been confessing; two victims he attempted to murder have identified him and have written their statements,” Abass said.

Assistant Inspector General of Police, Zone 2, Mr Lawal Shehu added: “He has confessed to having killed some victims and I want to commend the Commissioner of Police, Mr Bashir Wakama and the commander of the Monitoring Unit, Superintendent of Police Daramola Sunday and his operatives for the excellent job of arresting the serial killer.”

According to the Commissioner of Police ,Wakama, detectives have not wrapped up investigations of the case.