Despite the uproar caused by the baby mama prank around Davido, his fiancee, Chioma appears unfazed by it all. 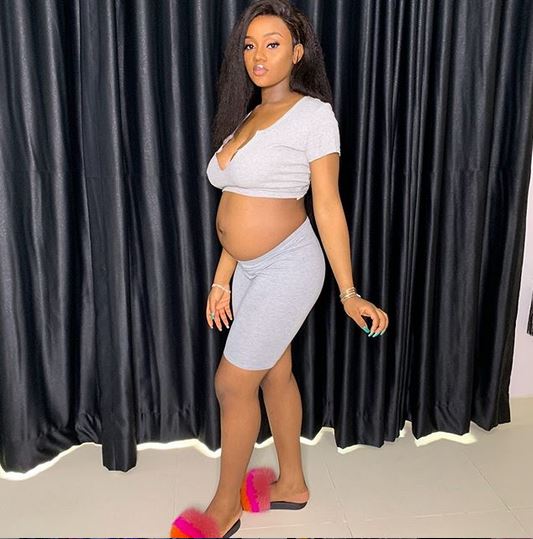 Apparently, new mum and fiancée of music star, David Adeleke, aka Davido, Chioma Rowland, seems to be unbothered about reports that went viral earlier in the week that her hubby had impregnated another lady.

In a video uploaded to Instagram, two ladies, simply identified as Helen and Susan, accused the ‘Fall’ singer of impregnating Susan after a one-night stand at Eko Hotel and Suites in Victoria Island, Lagos.

Reacting to the claims, Davido vowed to sue the ladies for slander, with a vow to demand N30bn from them.

With a N1m cash prize for anybody who could offer useful information on the ladies, it came as no shock that Davido soon announced on social media that the ladies, who he described as ‘low lives’, had been found.

He wrote on Twitter, “Found them. I will be suing both culprits for N30bn in damages! Dem go shit that money for Kirikiri (They will excrete the money in Kirikiri Prisons).”

Meanwhile, the ladies in question later said their claim was meant to be a harmless joke/prank, adding that Nigerians took things too far.

Interestingly, amid all the social media brouhaha, Chioma appeared unruffled. Basking in the euphoria of being a first-time mum, the 24-year-old fondly called Chef Chi shared some pictures she took in the later stage of her pregnancy. She also lovingly promoted her hubby’s latest single on her Instagram page.

Davido who is known to be generous to his fans, lamented that his wife deserved better than the slanderous reports after nine months of pregnancy. He took to Instagram to write, “After all the good I do for the community and people, this is what I get.

“My wife stays out of the way, doesn’t trouble anybody, minds her business and this is what she gets after nine months of carrying my first son.

“They went too far. As much as I’d love to forgive them, I can’t and they must face the law.”

However, the latest claims continued to generate mixed reactions on social media. While some came to Davido’s defence, others noted that celebrities led careless lives and were often unbothered about having children out of wedlock.