The burial date for the woman who died alongside her son in the tragic Onitsha fire incident will be buried next month. 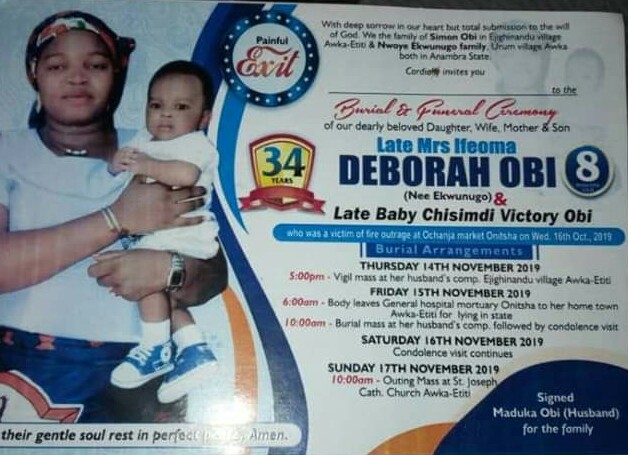 Burial poster
Burial poster of woman who died with her child in the Onitsha fire incident is out.
The woman and her baby were burnt to death while more than 40 buildings were razed in a tanker explosion at Upper Iweka area of Onitsha, Anambra State two weeks ago.
The woman and her child will be buried on the 17th of November, 2019.
Over 500 lock-up shops were also gutted by the fire along with the Iweka street market leading to Ochanja and Menax markets.
The explosion was started when a tanker laden with Premium Motor Spirit, otherwise known as petrol, descending from the Zik’s roundabout end of Onitsha-Enugu expressway, lost control at Toronto Hospital and veered off the service lane. The tanker’s head fell off and went up in flames after spilling its content within the area.
It was gathered that the woman carrying her baby reportedly tried to jump out of her shop, but mistakenly stepped on a slippery object and fell into the gutter raging with fire.
She could not be rescued as the inferno covered the entire area. According to an eyewitness, the fire started at about 10:00 a.m. and there was no presence of fire servicemen at the scene.
Top Stories