Fake Pregnancy: Davido Shares Video Of The Ladies Who Accused Him Having Fun At A Swimming Pool (Video)


Helen and Susan who accused Davido of impregnating one of them have been spotted having fun at a swimming pool. 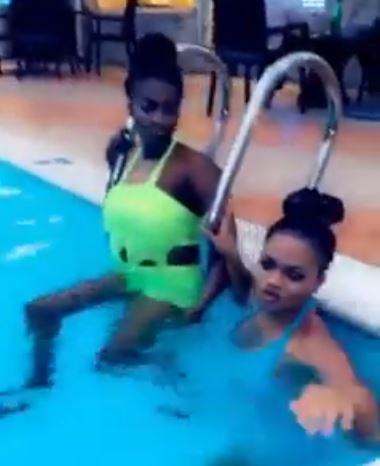 Helen and Susan
Following the scandal that rocked Davido after two sisters, Helen and Susan alleged that he impregnated one of them, the singer has now forgiven them.
The singer has also taken another step by sharing a video of the ladies at a swimming pool having fun after Davido was brutally attacked for handcuffing the girls without following due process.
He shared the video writing: "Free and living la vida loca #Freebirds"
However, Nigerians have continued to troll him saying everything was arranged in a bid to promote his new song.
Watch video below:

As Your Face Be, Na So Your Confusion Loud - Uche Maduagwu Slams Mr Ibu for Endorsing Atiku Abubakar Ahead Of 2023 Presidential Election
Recent Stories