Horror! Truck Crushes Motorcyclist And His Passenger To Death In Ogun


A truck which was laden with soft drinks has crushed a motorcyclist and his passenger to death in Ogun. 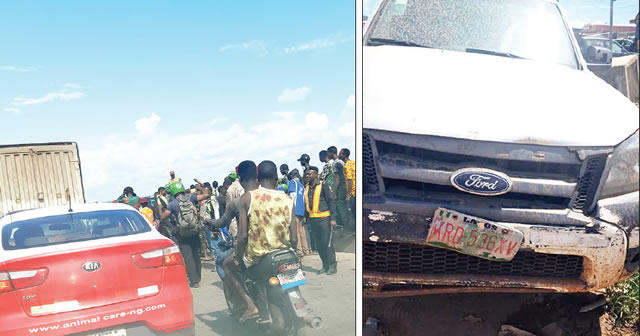 According to a report by Punch Metro, a soft drink-laden truck, on Wednesday, crushed to death a yet-to-be-identified operator of the OPay motorbike ride-hailing service and his passenger.

The accident occurred on the Kara Bridge, Lagos-Ibadan Expressway, around 2.20pm.

There were conflicting accounts of how the crash happened, with some eyewitnesses accusing the truck driver of swerving in the direction of the motorcycle and crushing the rider and his passenger to death, while others stated that the motorcyclist rode against the traffic and ran into the path of the truck while trying to manoeuvre his way.

Punch Metro gathered that the truck driver, who was almost lynched by other motorcyclists, was rescued by the police and officers of the Federal Road Safety Corps.

It was learnt that the truck, with number plate KSF837XV, and the driver had been moved to the Warewa Police Station in Ogun State.

The Ogun State Sector Commander, FRSC, Clement Oladele, who confirmed the accident, stated that it was caused by wrongful overtaking, adding that the corpses had been deposited in a morgue.

Oladele, who noted that motorcycles not higher than 200 cubic capacity were not allowed to ply the expressway, urged motorcyclists to desist from plying the highways, adding that they exposed themselves and their passengers to danger.

In another development, a pupil of the Majidun Grammar School, Victory Asapa, was on Tuesday, crushed to death by a Ford pickup van with number plate KRD 536 XV at the Agric bus stop in the Ikorodu area of Lagos State.

PUNCH Metro gathered that Asapa and two of her mates were on their way home after school hours and wanted to cross the road at the bus stop but were crushed by the van around 4pm.

It was learnt that one of the pupils had suggested that they make use of the pedestrian bridge to get to the other side of the road, but Asapa and the other allegedly ignored the advice.

While the pupils were crossing the road, the driver of the pickup van, Olonruntobi Ajayi, allegedly knocked down Asapa.

An eyewitness, Bola Aderibigbe, said Asapa died on the spot, while her mate, who crossed the road with her, escaped.

He added that the tragedy would have been averted if the victim and her friend had listened to the advice of their mate, who opted to use the pedestrian bridge.

Aderibigbe said, “The girl and her friends were coming from school, but when they got to the Agric bus stop, they wanted to cross the road when one of them said that they should use the pedestrian bridge, but the other two insisted that they would run across the road.

“So, the one, who said they should use the bridge, went ahead to use it, but as the other two crossed, the pickup van driver, who was driving out of Ikorodu, knocked Asapa down, while the other girl managed to escape.

“The accident made Asapa hit her head on the road and she died on the spot. If both of them had listened to the advice of their friend, the accident would not have happened.”

Mixed reactions trailed the circumstances leading to the death of the 14-year-old pupil as a picture of the accident, which was posted on Instagram by Instablog9ja showed sympathisers gathering round Ayapa’s remains with her books scattered on the road.

An eyewitness, who spoke on condition of anonymity, said the corpse had been evacuated and deposited in the Ikorodu General Hospital’s mortuary.

When contacted, the state Police Public Relations Officer, Bala Elkana, who confirmed the accident, said the corpse had been evacuated to the Ikorodu General Hospital, adding that the driver of the van had been arrested and the vehicle impounded.

Elkana said, “The accident happened on Tuesday, October 29, 2019, around 4pm at the Agric bus stop. One Victory Asapa, 14, a pupil of the Majidun Grammar School in Ikorodu, was crossing the road when a pickup van suddenly knocked her down. She was immediately rushed to hospital, where she was confirmed dead.

“The driver of the van, Olonruntobi Ajayi, of the Agodo area of Odogunyan, Ikorodu, drove a Ford pickup van with number plate, KRD 536 XV, belonging to The Olorun Tele Integrity Nilon Contest Company in Odogunyan. The driver has been arrested and the vehicle has been impounded. Investigation into the case is ongoing.”