The Pains, Harassments, And Joys Of Heavily Endowed Ladies


Even though they attract a lot of attention, ladies who are well endowed have revealed that they go through some mix feelings because if their size. 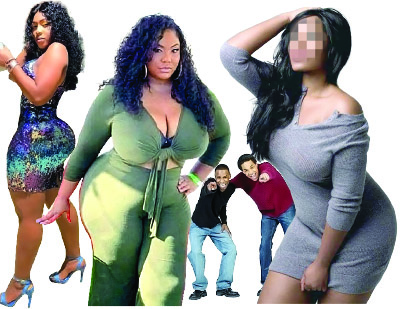 It is incontrovertible that Africa men love it big. Being well endowed, for many of them, is the definition of true beauty in the continent. That perhaps, may have accounted for the craze by most ladies in the Federal Capital Territory (FCT) opting for a highly-expensive artificial enhancement just to attract the attention of the male folks.

However, interacting with many of the highly endowed ladies revealed that they go through some mix feelings. While some are easily harassed in public places greater number of men not only prefer, but also can do anything to have the succulent, large body-built ladies by their side as succour after a stressful day.

Despite being ladies’ selling points of attraction for love advances and patronages, it has become source of woes for some of the heavily-endowed ladies due to the high rate of harassment from the male folks they face in public places.

Some of them that recounted their mixed lot told Daily Sun that though they like their stature as it has attracted lots of love advances and favour from the male counterparts, even from women at some points, their only regret is the harassment they get in public places, especially at motor parks and markets.

Speaking to our correspondent at Wuse 2 behind Banex junction, Uju Okereke admitted that well-endowed ladies are being harassed in public places but insisted that being well endowed is very good business because she has gained a lot of favour from it.

“I like my stature, there is nowhere I have visited without getting love advances and attention from the public. Most men even stumble while looking at my backside. The other day a man packed his car and came after me only to ask if it was natural or I am wearing an artificial butt. Though funny, however, it has paid my bills on several occasions.

“The only thing I dislike about it is the attitudes of some motor park touts. I find it very difficult to move freely at the park without a male friend accompanying me. I will never forget the day some touts reduced me to nothing with their verbal expressions and actions.

“I went to one of the parks in Nyanya, an Abuja suburb, to make inquiries only to hear a voice from behind screening; ‘this is seat oooo….. I want to seat oooo, immediately I turned, they started coming from every angle, touching me all over my body.

“Another experience was when I went to Wuse market to pick some fairly used clothes (okrika). When I bend down to source the clothes, a guy from nowhere just touched my butt, when I stood up before I could say a word, his fellow traders started laughing and saying, ‘this one is real seat.

“It is very embarrassing because you cannot freely move in some areas alone to some extent that even some women will be gazing at you as if you are not a woman like them,” she recounted.

A Corp member, Christy Ogbode, residing in Kubwa village, confessed that ladies who are highly endowed face a lot challenges in public places though they still enjoy some benefits.

She recalled that she nearly cried at NNPC junction in Kubwa when most of the taxi drivers refused to carry her, insisting that she must pay for two. “It was an experience I will never forget in a hurry. On that faithful day, I was supposed to board a taxi from Kubwa to Berger junction, I stood there for more than two hours all the people that came out with me left me there.

“They kept saying, ‘this one na load oooo, babe you are too much, this one na heavy duty’. That was how they kept making jest of me till God brought a Good Samaritan who helped me out,” she narrated.

A resident of Mpape, Ann David, noted that the way ladies are harassed in public places portraits the backwardness of the country, attributing it to idleness of most people.

“We are still very backward because if we are civilized, you can’t just see a woman on the street and start harassing and touching her unlawfully. When you react, some people will say it is the way you dressed that attracted them. In my case, I was wearing a jeans trouser and top the day I was disgraced in the market. It was like a movie because till date I still can’t comprehend how it happened.

“I walked into the market to pick some items and a young man just touched me from the back when I tried to react that was how all of them from nowhere took their turns. It is very bad. So, because you are naturally blessed, you can’t move freely like others,” she queried rhetorically.

Another respondent, Theresa Oche also lamented that most ladies are harassed in public places because of their beautiful stature, quipping that she has found an antidote.

“I no longer pick offences when they start calling me names and it has really worked for me. When I notice they want to make advances, I join them and when they see that I am not angry, they let go. If you become angry or want to fight back, you will end up disgracing yourself,” she noted.

In the opinion of some of the men on the streets, the ladies are harassed in public places because some men that won’t stop marvelling at such endorsement would want to go any length to verify the authenticity.

A taxi driver, operating around Maitama axis, Titus Age, confessed that ladies are harassed especially the heavily endowed ones, stressing: “It is true that some ladies are harassed. There are some things that you will see and you cannot hold your feelings, especially when you know you can’t afford it. Stylishly touching it can ease the tension in you.”

Corroborating Titus’ opinion, a trader at Utako market, Sam Onsa, argued that the ladies are also contributing to what is happening to them, emphasising: “I like them big and large. It is true that they are harassed, but they too need to help us. The way some of them package these products even a heavenly minded man must be tempted.”

However, a cloth dealer at Nyanya market, Dorothy Kennedy, argued that the seductive manners the ladies dress contribute to the harassment melted on them, noting: “I must confess that even as a woman, I like well-endowed ladies, but some of them need to work on their dress codes.

“That you are gifted does not mean you should move around the town half naked harassing men emotionally. Some of them leave their homes without putting on bras and underwear. When you place goods for sell, those that are in need of it will definitely come after it,” she joked.