The 24-year-old got a first-half treble as the Canaries crushed Mehmed Bazdarevic's men in the competition's Round of 32 tie. 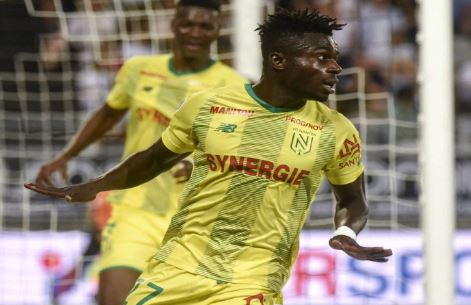 Going into the encounter, Simon had fired blanks as the Canaries bowed 1-0 to Monaco in Friday’s Ligue 1 game.

However, against the Ligue 2 outfit, the Nigeria international was in sparkling form as his first-half goals sent Paris FC home with heads bowed low.

Youan set up the former Levante man for his second goal after 35 minutes before completing his treble in the 43rd minute after Ludovic Blas had made it 4-0 seven minutes earlier.

In the second half, Louza and Mehdi Abeid completed the rout as Nantes recorded their biggest ever win in the championship’s history.

The Super Eagle was accorded a standing ovation as he walked off the pitch after his replacement by Mali international Kalifa Coulibaly with 25 minutes left to play.

Having scored his third career hat-trick, Moses will be hoping to get more goals when Christian Gourcuff’s side visits Bordeaux in Sunday’s French topflight game.

They are second in the log with 19 points from 11 games – eight points behind leaders PSG.
Top Stories