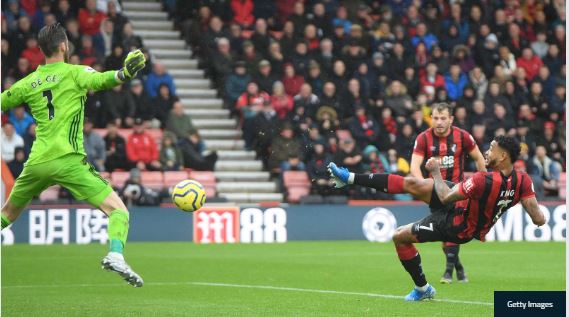 Joshua King stunted Manchester United's form resurgence with the lone goal in a 1-0 win for Bournemouth at a wet and windy Vitality Stadium.

Ole Gunnar Solskjaer's men looked to have turned the corner following a morale-boosting run of three consecutive victories in all competitions but their failings on the road returned on Saturday.

Anthony Martial's presence in the starting XI failed to add potency and King ensured his former club's long wait for a clean sheet in a Premier League away game stretched to 11 matches.

The striker was afforded time to skilfully turn and shoot in the 45th minute, his clinical finish lifting the Cherries three points clear of a United side destined to end the weekend in mid-table.

United made a bright start under grey skies as Daniel James set up shooting opportunities for Andreas Pereira and Fred.

After a challenging first 15 minutes, Bournemouth appealed unsuccessfully for a penalty when Ryan Fraser went down under minimal contact from Ashley Young.

VAR approved the decision and decided against intervening following Jefferson Lerma's nudge on Martial in the opposite box.

United could hardly protest the opener as King chested down Adam Smith's cross, spun away from Aaron Wan-Bissaka and volleyed through David de Gea's legs.

The rain relented after half-time, helping Aaron Ramsdale to parry Pereira's long-range drive, and De Gea likewise had to be alert to block King's finish when a ball in behind broke kindly.

Solskjaer sent on two teenagers in search of an equaliser and one, Mason Greenwood, went close, but the forward's volley from Fred's cross came back off the near post.
Top Stories