This did not go down well with some Nigerians, as they posed questions about the function of the office of Vice President, Osinbajo. 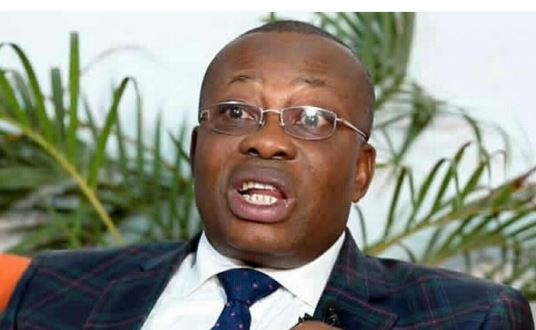 Monday Onyekachi Ubani, the ex-2nd Vice President of the Nigerian Bar Association (NBA), has slammed President Muhammadu Buhari over the recent signing of the amended Deep Offshore Act in London.

Buhari signed the bill on Monday in London, stating that the amended Bill will generate at least $500m additional revenue for the Nigerian government.

The Chief of Staff to the President, Mallam Abba Kyari, was with him when he signed the Act.

This did not go down well with some Nigerians, as they posed questions about the function of the office of Vice President, Osinbajo.

Lending his voice over the development in a Radio Programme in Umuahia, tagged, “Open Parliament”, and monitored by DAILY POST on Tuesday, Ubani opined that the action of the President contravened the nation’s law, as well as exposed the internal wrangling in the Presidency.

The Abia-born lawyer said, “What I know is that anytime the President is going for annual vacation, whether for two or three days, Buhari is supposed to hand over the realms of power to his vice President in accordance with section 145 of the constitution.

“And to remind you, there was a time the President traveled for ten days during his first tenure and handed over the realms of power to the Vice President. He has done it two or three times, while he was away. All of a sudden, after the Vice President acted a thing presidency considered unfavorable to them, Buhari stopped handing over power”.

Ubani added, “There was sometime in April where he (Buhari) traveled to London for two weeks, and never handed over. That matter is presently in court. Because, in Nigeria, as a lawyer, I sued the President to know why he didn’t hand over to his vice President, Professor Yemi Osibanjo. That particular suit is pending, and the President has also now taken up again, seventeen days going by what Shehu said on the Channel television, Buhari had been away for 17 days and he didn’t hand over to his vice.

“And to now compound the problem and make it embarrassing to some of us, seeing President Buhari signing our law in a foreign land, to me, that is very embarrassing. There is no way you can justify that. He could have come back, while hurrying and taking the bill to London? Is it to spite the Vice President? Meanwhile, could it be the vice President (Osibanjo) took the bill to sign, but, it was the Chief of Staff, Abba Kyari. Clearly, all is not well within the Presidency”.