Chelsea were three goals down in the Champions League tie, before Ajax saw two of their central defenders Daley Blind and Joel Veltman sent off. 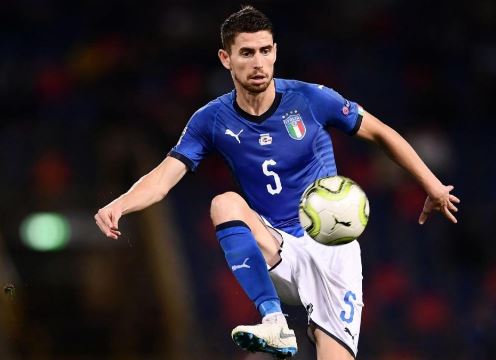 Chelsea midfielder, Jorginho has criticised Frank Lampard’s men for not being able to defeat Ajax at Stamford Bridge in the UEFA Champions League encounter on Tuesday night.

According to Jorginho, the Blues should have played with more calm when they had two more players against Erik ten Hag’s side and not go for goals straight away, adding that they could have passed a little bit more to find space against the visitors.

The Italy international, however, warned his team-mates that they must learn from their mistakes against the Dutch side or risk qualifying into the competition knockout stages.

Chelsea were three goals down in the Champions League tie, before Ajax saw two of their central defenders Daley Blind and Joel Veltman sent off.

It swung the match in Chelsea’s favour, with a second penalty of the match from Jorginho and goals from Cesar Azpilicueta and Reece James bringing the hosts level at 4-4.

“We didn’t win and we should have done,” said Jorginho after the match as quoted by Evening Standard.

“In this situation when you are with two more players, I think we could win and we should.

“We have learnt that we cannot make mistakes, at this level of football you can’t. Every single mistake we can lose the game.

“We could play with more calm when we had two more players, not go for goals straight away, pass a little bit more to find space. I think we learnt that we can improve from this game.

“I think the most important thing is we didn’t give up. When it was 4-1, it is hard to believe and we did. It is so important for us.”