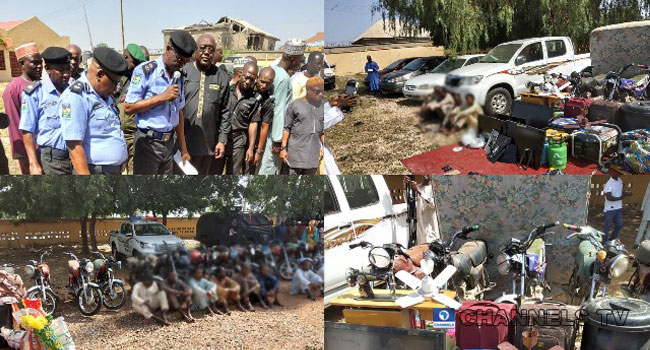 Suspects arrested by the Police

The police in Zamfara state have arrested five suspected car snatching thieves at the Tundun Wada area of the state and recovered four vehicles and a pistol gun.

According to the police, the vehicles belong to different owners resident in the state and Kebbi.

The commissioner of police, CP Usman Nagogo, explained that their arrest and recoveries of stolen items were achieved in a combined operation with officers of Operation Puff Adder.

“Their recent atrocity was at the house of coordinator National Directorate of Employment (NDE) Zamfara State where they went to his house, robbed him, and made away with his official Toyota Hilux Vehicle on gunpoint, and later took the vehicle to Niger Republic for sale.

“All the suspects confessed to their past and present crimes and further led the police investigation team to Suleja in Niger state as well as Niger Republic where three (3) other stolen vehicles belonging to Nura Garba Daura, of Federal University Birnin Kebbi, Kebbi state, Nasiru Ahmed of Nasarawa Tudun Wada area, Gusau and Ibrahim Sani of Sabon Gari area, Gusau were recovered.

“All the vehicles were stolen at gun points and in some of the robberies; women were raped and subjected to all forms of humiliation. The searches in their houses led to recoveries of so many stolen items,” he stated.

CP Nagogo also mentioned the arrest of a suspected kidnapper, one Aliyu Alhaji Riskuwa, in Bukkuyum LGA of the state, and four different brands of motorcycles were recovered in the operation.

“On 6th October 2019, our Operatives in Bukkuyum LGA, as a result of that operation, the above-mentioned suspect was arrested. In the course of the investigation, he was connected with a case of kidnapping of three (3) persons at the house of one Alhaji Babuga ‘M’ of Kairu village where the sum of twenty million Naira was demanded.

“Four (4) Motorcycles suspected to be stolen were recovered during the raid operations. An investigation is in progress with a view to fishing out his gang members for prosecution.”

The police boss called on people who had at some point in time, report a stolen item, to come with genuine documents for identification and possible release of their items.