A lady got a surprise marriage proposal from her boyfriend while pretending to have a fight with his friend. 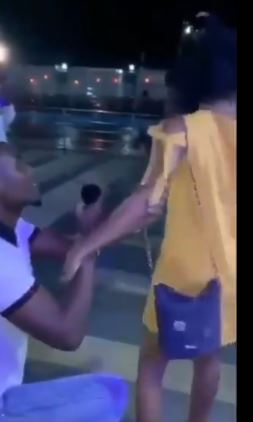 A man and his friends staged a fight only for his girlfriend to get a surprise proposal.

The man went down on his knees while his friend was shouting at the top of his voice in a loud fight where the girlfriend who had no idea she was about to be proposed to was trying to settle the fight.

She kept holding and trying to get the guy shouting to calm down while her boyfriend was left kneeling down as she begged the other guy.

The brawl continued until her boyfriend repeatedly started tapping her from behind to get her attention, but she paid only little attention to him and continued trying to settle the fight. It took all the guys pretending to be involved in the fight to tell her to look at her boyfriend before she noticed he had a ring box in one hand.

She immediately got the joke, walked up to her man and gave him a hug as she said 'yes', smiling.

What a way to propose 🤣🤣🤣 pic.twitter.com/LGLlPAAEzm